The town of L´Hospitalet in Tarragona l´Infant and the Cantabrian town of Cacicedo, belonging to the municipality of Camargo, were the two big competitive locations this weekend for the boys of the Kometa Cycling Team junior. In both, the riders of the youth training of the Alberto Contador Foundation once again reaped very positive results.

Gerard Bofill and Juan José Rosal were the first to compete, on Saturday, hand in hand with a Time Trial Championship of Catalonia in which the first of them hung the bronze medal. On a 12.5 kilometre track and in unbeatable weather conditions, Bofill set the third best time of the race, five seconds behind the champion Adrián Ferrer (CC Mollet), winner with 16:45. Rosal, meanwhile, finished fourth, 11 seconds behind the winner. 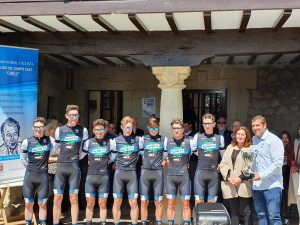 In Cacicedo, on the other hand, the 28th edition of the Chele Campos Memorial took place this Sunday. In the race, over 87 kilometres, Jorge González (MMR-Academy) won, who won in the sprint of a leading group where Javier Serrano and Pablo Gutiérrez finished in second and third place. Three riders (Serrano, Gutiérrez, Pedro Beneit) finished between the first ten and five, between the twenty.

The Chele Campos Memorial offered another great performance by the Madrid team, which won the main secondary classifications: it was the best team, with the winners of the mountain (Pablo Gutiérrez), the flying goals (Javier Serrano), the special sprints (Francesc Bennassar), the best Cantabrian (Pablo Gutiérrez) and the best first year junior (Pedro Beneit).