The staff of the Kometa Cycling Team junior began planning for the next season this Saturday holiday in Spain, Día de la Hispanidad. The entire squad, as well as their families, met at the Hotel Princesa de Éboli de Pinto (Madrid) with the top managers of the Alberto Contador Foundation, with Fran Contador, Felix Garcia Casas and Jorge Ramos at the front.

During the meeting, which lasted for about five hours, the riders and their tutors were able to learn more about the philosophy of the Foundation’s work and a small planning of the calendar for next season. Similarly, in addition to the protocol signatures of commitments, the riders were subjected to a measurement and testing of both sizes and materials. 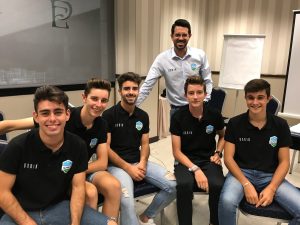 This Saturday was the first time that the eight cyclists selected on the La Mafia Campus sit at the table in Zaragoza have been able to meet the five cyclists who remain on the squad with respect to 2019: Pedro Beneit, Francesc Bennassar, Alejandro Luna, José Luis Medina and David Quevedo.

The next commitment for which the cyclists of the junior team will be called will be the traditional pre-season coexistence in a mountainous environment. It will be a concentration in which there will be a departure in group bicycle, but that will be preceded one day before by a walking in a high mountain environment.