Juniors riders from RH+/POLARTEC won this weekend in France the team time trial of the Tour of Les Portes du Pays d’Othe, the first stage race that has ridden abroad the team in its four-year history and that finished with an excellent final result: Claudio Clavijo fifth overal. 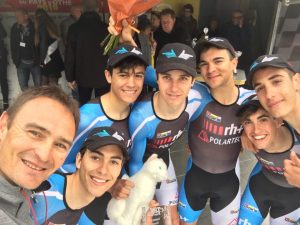 “It’s a very serious race, UCI category, and in which 28 teams took the start”, explains team director Felix Garcia Casas. “They were many of the best teams in Europe, and we won the time trial, over 16.5 kilometers, that has also been the longest we’d ever run”.

The RH + / POLARTEC took off this time trial when they had only started half the registered teams, some of which could not even do it after losing in the first stage more than two riders, after a hellish stage of rain and cold.

The Spanish team had already made clear its aim to set the fastest intermediate time, but there it lost two of its riders, Jose Antonio Garcia and Cristian Fernández. Garcia Casas chose to risk and continue with the four that at least should cross the finish line, which succeeded in scoring a spectacular time, distancing in 20 and 35 seconds the two next teams.

The result pushed to Claudio Clavijo and Alejandro Ropero to the second and third overal, but later, in a last sector really hard and with continuous attacks and breaks, they accused the effort in the morning. Clavijo managed to qualify fifth overal, while a puncture relegated Ropero to tenth.