Félix García Casas, sport director of the Junior Team and Responsible for the Sports Area of Alberto Contador Foundation, talks about the experience of walking the Way of St. James

Many say that the Way of St. James marks a turning point in their lives. In the case of the members of Alberto Contador Foundation it may be a little exaggeration, since they only did the last stages on foot, although they were intense and full of meaning. It was certainly a great experience, with anecdotes that will be remembered in the conversations throughout the season, and also an opportunity to get to know each other better as persons, something especially valued by those responsible of the Foundation. 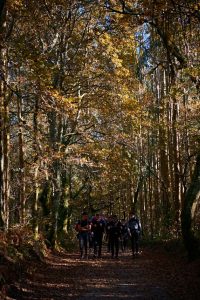 Félix García Casas, director of the Junior team and Responsible for the Sports Area of Alberto Contador Foundation, participated as one more in the expedition to Santiago and took the opportunity to analyze what he expects from Polartec teams in 2017. “The junior team every year is a small unknown, because many riders change and the best always pass to the next category. Each year is a restructuring. In 2017 we will have 5 juniors of second year who will be in charge of taking the team forward and, above all, I think the team is very, very compensated, with cyclists for all terrains, starting with the last winner of the Spanish Cup, Pol Hernández”.

As for the U-23 team, Félix García Casas says that its most important mission will be “to finish consecrating in the category and to show throughout the season what this year has done only in some phases of the year. I hope the team reaches maturity and maintains regularity to be one of the squad’s references. We have a lot of quality, some juniors who come point very high, others coming from abroad, both Spanish and foreign, who can also contribute a lot. Riders like Harrison Jones or Daniel Viegas can become a benchmark, as can do many of their teammates”.

Returning to the Way of St. James, Garcia Casas thinks that the most successful of this project “has been to combine what is always the first meeting of the team, to work together and know the whole group, the relationship between riders and staff, with the special contribution of the Way in order to overcome a challenge, to have a cultural and also religious experience in the case of believers. It has been a more enriching campus than usual”.

The four days of walk through the millenary route has given to the members of Alberto Contador Foundation “the satisfaction of being able to overcome the challenge of the hardness of kilometers traveled on foot and doing it all together, leaving no one behind thanks to the support of the group”, explains Felix. “Share with more than 40 people a bunk inside a common pavilion, share the bathrooms, take turns for the shower, etc. putting us all to the same level, whether they were riders, directors or auxiliaries, is not so habitual. Younger cyclists have had the opportunity to know the U-23s, who are their reference, the goal, and everyone in general has come to know much better what the Fundación Contador means and what it brings”.

The best of these days of coexistence, says Felix Garcia Casas, “is to be able to evaluate not so much the physical component of the riders, something that is already taken for granted, but his mental strength, his personal qualities. Walking five hours at night affects anyone and there they have demonstrated their willpower, their ability to overcome bad times, because there were guys who had a bad time, but everyone managed at the end to get ahead, which is the important thing.

The Responsible of the Sports Area of Contador Foundation thinks it’s important that “kids from 16 years of age have lived this experience, it will be unforgettable for them, as well as for me,” he says. “The Way of Saint James has brought us mental capacity, clarity of ideas and to know how discern what we want. And when you get to the end of the road you think that everything you’ve passed was ok, from the blisters on your feet to eating only a sandwich for lunch or spending the whole day walking with a backpack on your shoulders.

Félix García Casas, like everyone in the group of walkers, also made a wish for the next season. “In life in general and in this sport in particular, the most important is health. We do not have to ask for much more, to us what marks the difference is how you are physically”. And about the Compostela, this is not the first one for him. “I will keep it next to the one I got after doing the Way by bike, although now that I have done it on foot, the change has been radical. Like this you interact more with others, you see everything more closely or at least, is my feeling. Now it has been more intense”.