Positive balance for the Spanish Cycling Team at the end of his visit to Belgian lands to compete in the men’s under23 and junior men’s and women’s category the prestigious Gent-Wevelgem, belonging to the Nations Cup. In the three races, the national team has given the face despite being a type of classic that does not get used to face and have had significant presence in the head of the peloton, where they have been battling with the best until the arrival to the same goal . 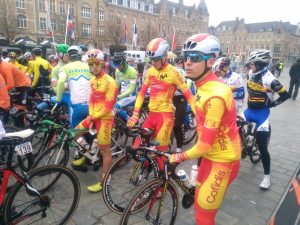 The most outstanding cyclist of the day for the national team was Carlos Rodríguez, who despite being a junior has distinguished himself as one of the best legs in his category. The runner of the Polartec-Kometa has been throughout the race one of the five or six men who took advantage with each of the arrivals to the characteristic walls of the area and the consequent hardening of the pace.

The last of these paved steps, has defined the trio (Manfredi, Waerenskjold and Simmons) that would play the glory, while Barre (France) and Vervloesem (Belgium) chased them interspersed and Rodriguez rolled, in no man’s land, in sixth position . Finally, the Spanish cyclist has been captured by the persecuting group and in the sprint of it has certified his 14th final position.

(Automatic translation, sorry for the mistakes)