The first day in line of the Istrian Spring Trophy provided the fourth top ten of the season for Italian Stefano Oldani. The Lombard finished seventh at the uphill finish at Labin, behind a steep cobbled steep slope with double-digit ramps, six seconds behind Hungarian Attila Valter (CCC). The Hungarian cyclist is the new leader of a race in which the Italian cyclist of the Kometa Cycling Team occupies seventh place, 15 seconds away. 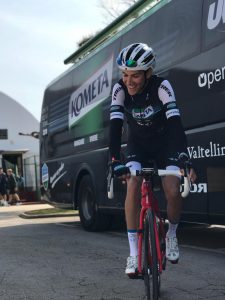 Oldani was the bet of the Kometa Cycling Team. Juan Camacho from La Mancha summed it up perfectly in the previous stage: “After a first stage as explosive as the Umag time trial, practically a sprint, one of the keys for the next two days is going to be to avoid very numerous leaks, to avoid something like what happened in the queen stage of the Tour of Antalya. And then come in very well placed at the start”.

The entire continental staff of the Fundación Alberto Contador worked hard to control the race and keep their strong man protected. The formation worked to maintain control and chase a leak of five runners who for many kilometers rolled in the lead with up to seven minutes of margin.  Camacho himself and Antonio Puppio emptied themselves after many kilometres of silent work to let themselves go in the final part and keep their strength for the next days, arriving in the last positions.

Daniel Viegas, Diego Pablo Sevilla and Isaac Cantón would brilliantly take over from their team mates to smooth out the race situation for Oldani. “We have to be as close to him as possible and for as long as possible”, says Sevilla. The Italian started in fifth place the last 400 metres, the hardest of the ascent, but had no margin to react to an acceleration of the Slovenian Rok Korosec (Ljubljana Gusto Santic), the Norwegian Kristian Aasvold (Coop) and the aforementioned Valter. Canton showed his climbing skills with an interesting 22nd place, 16 seconds from the winner.

Stefano Oldani: “The team did an impressive job. All my team-mates have been out of ten. We have a very compact block, they have shown it again and I am sad because all that work deserved a victory as a reward. Tomorrow will be another day and I think it could be better for my abilities. Today the finish in pavé had a lot of slope, it was for very powerful riders. I am one more rider of cadence. Tomorrow is better for me. I’m going to try to win, first for the team, because they deserve it, and then for me”.

This Saturday the third stage will unite the small and scenic village of Vsar with the no less beautiful town of Oprtalj, also over 161 kilometres and again with a finish that comes after a small climb. This time a little shorter than Friday’s, but also with a little more average percentage.