Alberto Contador, the only Spanish cyclist with the big three (Tour, Vuelta and Giro) in his record and recently retired after 15 years as a professional, today attended the ‘Europa Press Sports Breakfasts’, where he pointed out that he is “exciting and I’m proud of the fact that many fans cried on the day of my victory in the Angliru”. 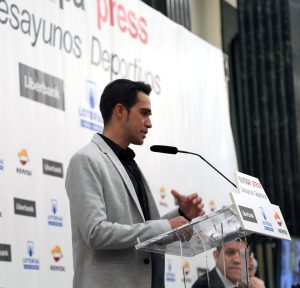 After fifteen years in professional cycling and seven (official) big tours in his record, the Madrilenian, close to turn 35, faces “very busy” the months after his retirement, according to the EFE Agency. “These months are very intense, the schedule is very tight, but I am happy to have projects and goals that excite me, it have been intense and demanding for 15 years, I always gave everything for victory, sometimes I was deprived of podiums and victories, but cycling is spectacle and emotions”.

Contador summarized his feelings recalling the stage of the Vuelta in which he arrived for the second time as a winner at the top of Angliru. “In the Vuelta 2017 I lost the options on the third day in Andorra but that fact allowed me to run my way, without calculator, and attack in unimportant ports, it had a higher value because people enjoyed the Vuelta. Telling me that they cried the day of the Angliru excites me and makes me proud”, he explained.

In his new life, Contador focuses on the development of the Alberto Contador Foundation, where he will work with youngs and with the aim of training kids through the sport of his life. “I am a very active person, I cannot stay at home, I have the Foundation with the objective of returning to cycling what cycling has given to me”.

Likewise, he will attend the fight against stroke, a disease that nearly cost him his life in 2004. “I suffered a stroke, I saved my life and I was able to return to the competition, I will take care of that branch and also that of cycling, to train kids through sports and cycling, that has important values”. Contador said that when he is a father he would like to train his son in the values ​​of sports and cycling, but he said he would not like to be a cyclist.

The “Pistolero” of Pinto considered “a pride” to be compared with the Italian Marco Pantani, since “he was a spectacle and made different attacks” and the fact of being recognized by the fans of cycling, even in other countries. Contador described his sanction for doping as an injustice, without a doubt the worst moment of his career. “That is the hardest thing that can happen to you at a sporting level, and personally for you and your family, I fought hard to show that it was not a case of doping, and people who followed the case would see that it was not a case doping, but sometimes there is no justice, I know clearly that it is not worth everything to achieve a goal, children see you as an example”, he said.

On the other hand, referring to mechanical doping based on the camouflage of an engine on a bicycle, Contador did not believe on that fraudulent system. “I do not believe in the use of the engine in top level racing, it does not cross my mind, if I had seen that I would have stayed at home”, he said. The Madrilenian defended the Swiss Fabian Cancellara, accused of using a motor in a race. “Cancellara did demonstrations throughout his career and did not need those practices”.

With Ivan Basso at the Polartec-Kometa

Alberto, who will attend the official presentation of the Giro d’Italia tomorrow in Milan, commented on the possibility of Chris Froome running the next edition of the Italian tour. “He has a great team and although the Giro is a different race and has a different climate, Froome is able to win it. It’s logical that he want to try”.

Alberto Contador was accompanied today by Ivan Basso, with whom he has launched the last project of his Foundation, the Polartec-Kometa Continental, also the development team of the Trek-Segafredo and embryo of what they dream a team of maximum category in the near future. The cyclist from Pinto said he shares with the Italian champion “the passion for cycling and for transmitting to young generations the values of sport”. Basso, for his part, stressed that the two share the idea of ​​”transmitting to the young the illusion for the little things, not only for winning big tours, but for never forgetting the child that we have inside and that is deluded with his first bicycle. The secret to make great champions is to take care of them from the base, to transmit the sport’s culture that cycling treasures”, he concluded.