In an unbeatable finishing touch for a great season for the whole junior squad, the Catalan Álex Martín achieved his victory this Sunday in the final overall of the Vuelta Ciclista a Talavera. The Polartec-Kometa rider, leader since the first day, defended a yellow jersey in whose fight he finished tied with eight other riders. 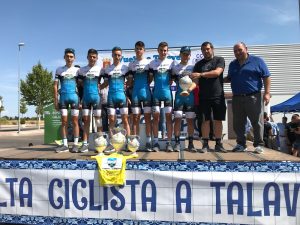 Martín, who finally finished second in the regularity classification, was accompanied in the top ten of the Toledo round by the Portuguese Daniel Lopes, fourth, and by the Andalusian Manuel Garrido, sixth. The Polartec-Kometa, in its first presence in the Talaverana race, won the general classification by squads, a plot always very valued in the formative structures of the Alberto Contador Foundation.

The third and last stage, the most complicated orographically by the passage through the foothills of the Sierra de San Vicente, ended up being resolved to sprint, a massive finish in which the fastest was Miquel López (Bathco). Many escape attempts tried to make their way from very tense beginnings in which a couple of big crashes took place. Juanjo Rosal and Carlos Rodriguez were filtered in a numerous attempt of twenty runners where the second and third of the general, Jokin Murguialday and Raul Garcia were integrated.

“That forced us to work in the platoon, where we collaborated with teams Fenavin and Ale-Respetad 1.5 m. In the end we were able to take the leak down to ten from the goal. There we opted to continue shooting so that there would be no surprises and the sprint would be reached”, explains the director Guillermo Gutiérrez. In this massive arrival, Carlos Rodriguez signed the third place. 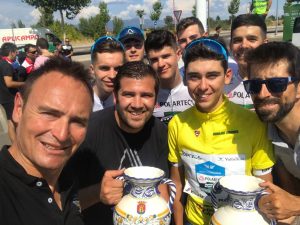 “The race was decided in the first stage, when we managed to put three riders in the front group, win it and position ourselves as leaders in both the overall individual and teams, something that ultimately made us control the race,” continues Gutierrez. “It has been a fantastic lap for us, although it makes me angry that with the spectacular work done by riders like Daniel Lopes and Manuel Garrido the podium with both of them has escaped us”.

“I can only make a very good assessment. I have managed to be very regular throughout the year, winning from the beginning of the season until the end, competing in the international calendar … That’s why I’m a little disappointed that I wasn’t called to the Innsbruck World Championships”, adds the final winner, Álex Martín.