Great result for the Spanish junior cycling that comes from the hand of Alex Martin and a wonderful performance of the entire block of the Polartec-Kometa. The Catalan rider won the overall final of the prestigious Ain Bugey Valromey Tour after taking the lead in the last stage of the French round, 105.5 kilometres between Artemare and Les Plans d´Hotonnes with four mountain passes on the track, one of them hosting the finish line. 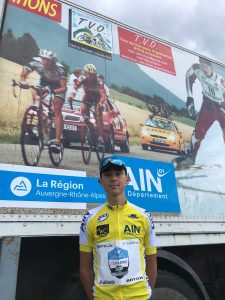 A very important and more demanding lap in which the riders have had ahead of them a very hard route where they stood out, during Saturday’s day, from the Grand Colombier. Martin, recent winner of the Vuelta al Besaya, has displayed on the French roads a lesson of patience and work, materializing his commitment to yellow in the final day, where he finished third but managed to jump from fourth to first place.

Fundamental this Sunday were the efforts of Iván Oliver and Manu Garrido, who sacrificed themselves for their partner. Oliver and Garrido had excelled at the escapes. Together within the last twenty-five kilometers, they stopped to wait for a Martin who had attacked from behind, breaking the race. Once together, within the final fifteen kilometres, Oliver and Garrido have squeezed in favour of their team-mate, who has taken over in the last seven kilometres to empty himself into a one-on-one battle against the leader, the second and third overall, who were riding without a team.

“It’s been a great day for everyone,” says Martín. “The truth is, it was an impressive lap for us. It started rather badly because the first day was a runaway of 22 riders and there were no people ahead, but they minimized the times in the two ports that were at the end for what could have been. From then on, the cyclists reacted,” said Félix García Casas, who was the event’s sports director. After a complicated first stage, in which he left 2:27 with respect to the winner, the Barcelona cyclist increased his presence in the race and began to improve in the standings.

“In the final stage the team’s behaviour was fantastic,” he says. “In the first cut of fourteen riders, Manu Garrido and Iván Oliver were already ahead, with the expectation that Alex would try in the second of the ports, from a distance, because the difference was important, and the final part was not so hard as to make that difference. But until the end he wouldn’t be able to leave alone. I was able to warn Manu and Ivan, who stopped and from then on a great performance started”. The lap was won by Alex by 45 seconds. “I would highlight the work of the riders, the level of form of Martín and also the bet that the team made so that he would not go to the Europeans, as planned, so that he could come here, to a hard, long-distance race, with international participation… A very high level race. Apart from the victory, I’m sure the boys have learned a lot from this experience.