The second weekend of the Cabedo Memorial got underway this Saturday with a new edition of the Castillo de Onda Trophy in which the youth of the Alberto Contador Foundation were once again the protagonists. The victory was for Juan Ayuso (Bathco, Alicante), while the Catalan Arnau Gilabert was on the podium thanks to his third place. José Luis Medina, sixth in the finish with the same time as his teammate, maintains his chances of taking the podium of the Victor Cabedo 2020 Trophy intact. 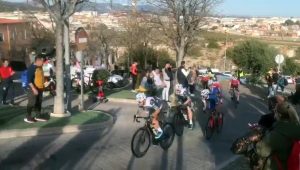 The climb to Vistabella emerged as the place where the race would move yes or no and it did. There Juan Ayuso started to go alone and there was a chasing group of seven units where the Kometa-Xstra Cycling Team junior had the presence of Gilabert and Medina, in addition to Extremadurian Jorge Gutiérrez and Pablo Carrascosa, currently second and third overall in the Cabedo.

The chasing group of seven units would arrive to little more than one minute and a half of Ayuso, more leader of the provisional general. In the arrival, in slope, they starred a very tight sprint in pursuit of the positions of honor. “Today we worked very well in the team”, thanks Gilabert. “We knew that we had to be at the front in the port to make a move along with Ayuso, Carrascosa, Gutiérrez and company. In the end both José Luis and I were able to be there in that chasing group that ended up playing for second and third place. It was all very tight, photofinish”.

Guillermo Gutiérrez, director of the Kometa-Xstra youth: “We made a plan to be in the front, in the cuts, during the two laps of the circuit. Facing the port we were clear that Bathco would make an approach with three or four riders, as it happened. There Ayuso attacked. The idea was to be with him, but it was not possible, as well as with Carrascosa and Gutiérrez. The team has worked very well, they are to be congratulated”.