The Belgian Wessel Krul became the new leader of the Vuelta a Bizkaia Júnior after winning a second stage in which he also triumphed in the breakaway. Belgian Davide Bomboi, eighth to 38 seconds, first in the main pack sprint, was the best among the Polartec-Kometa riders. Carlos Rodriguez gave up two positions in a general standings where he is now ninth, at 39 seconds. 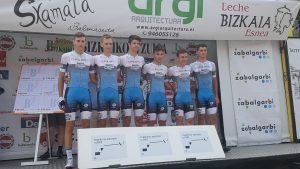 The Irish Ben Healy and the British Mason Hollyman (Zappi), the Belgian Krul (Young Cycling Team), Mario Aparicio and Pelayo Sánchez (MMR-Academy), the also British Harrison Wood (HMT-JLT Condor) and David Domínguez (Bathco) were the seven riders who would end up integrating a breakaway that was shaped throughout the day and that the partial victory was played. The joint work of Polartec-Kometa and Castillo de Onda on the last climb to Milloi would be very effective in reducing the time disadvantage with the head of the race and keeping the general classification open.

“The reading of this second stage is positive despite not having been able to enter the escape. Thanks to the work of our boys and Castillo de Onda we have been able to reduce the time and, at least, continue to have options in the general classification. Today the race was completely dominated by foreign teams. But tomorrow will be another day, a decisive day, and we will try to reduce the time we have lost in the general classification”, explains Guillermo Gutiérrez, the director.

That’s right. This Saturday comes a double stage for the outcome of the Itzulia. In the morning, a first sector of 69.4 kilometres with start and finish in Sopela where you will have to pass the Alto de Unbe twice on its Laukiz slope. And in the afternoon, the expected seven-kilometer climb between Trapagarán and La Arboleda.