34th final position for Carlos Rodríguez in the time trial of the junior category of the World Championships. The Kometa Cycling Team from Granada set a time of 41:32, more than three minutes superior to the 38:28 with which the Italian Antonio Tiberi secured the gold. The Dutchman Enzo Leijnse and the German Marco Brenner hung the silver and bronze the competition. 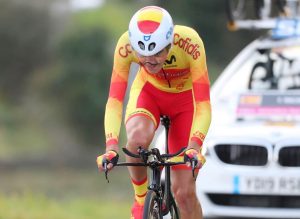 Rodríguez’s performance, which no longer set a good time in the first intermediate step, was hampered by a puncture during kilometre 10. According to the Spanish Cycling Federation, the Andalusian’s tubular began to lose air and Rodríguez himself had to rectify the trajectory in a curve to avoid going to the ground. The puncture cost him approximately one minute more and during his performance he entered a dynamic of being bent and unfolded by the Frenchman Hugo Page.

It was also Fernando Tercero from La Mancha, who in his first World Championship experience, and after having left the first, finished with the 40th best time at the finish with a time of 42:05.

“I started calmly because it was a very long time and in the first intermediate point, although I was losing some time, I was feeling quite well. I wanted to start little by little and with three kilometres to go on the first lap I realised that the front wheel was punctured. It took us a while to replace it and from then on the feeling wasn’t good. Even so, I was on a par with the French rider (Hugo Page), but the truth is that in my mood I’ve come a little down”, he explains.

“Let’s hope that the fortune we lacked today will be in the road race and we can offer a good result,” added the Almuñecar.