Guillermo Gutiérrez, sports director of Polartec-Kometa junior, spoke of the suitability of hitting the table in the Spanish Cup race that was stopping this Sunday in Unquera (Cantabria) to smooth out the classification, with two races remaining, and face the next phase of the season with more confidence. Carlos Rodríguez from Granada reinforced his leadership in the general standings of the Cup when he won the Memorial José Luis Junco, a fourth qualifying round of this tournament in which the Catalan Álex Martín finished third. Polartec-Kometa, in parallel, also first in the squad, regained the lead in the team standings. 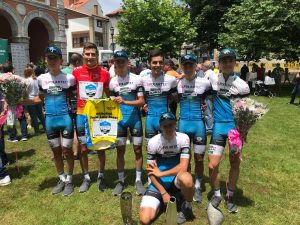 Rodríguez exhibited a great reading of the race. With fifteen kilometres to go before the finish line, when a quartet with a margin of twenty seconds was in the lead, a quartet in which Martín was present, the Almuñecar quartet was accelerated by three other riders, among them Iván Cobo, who ended up forming a small group of eight units. The advantage over the main pack, 40 seconds, seemed essential. And it was. Rodríguez, Martín, Cobo, Jeisson Cassallas, Sinué Fernández, Javier Fernández, Joseba López and David Camargo consolidated their advantage. The final two-kilometer climb was to pass sentence.

It would be within the final kilometer, about 500 meters of the finish, where the Almuñecar, red jersey jersey reddish, pulled out to go solo, winning with four seconds on Ivan Cobo and seven on a trio formed by his teammate Alex Martin, Jeisson Casallas and Sinué Fernandez. A victory that comes to reward a great work of the Madrid squad, always present in the race from the starting gun with the presence of Ivan Oliver, Manu Garrido and the Portuguese Daniel Lopes.

“The truth is, it was a fantastic race. We did a fantastic job, the sensations were very good and the whole team is very happy with the result. A perfect day. We hope that next week the Vuelta al Besaya will continue to feel equally good and that the results will also be good”, says Rodríguez. “We are very satisfied”, said Álex Martín, who finished second in the general standings of the Cup. “The team has been very present in the race, controlling at all times. Once the final team has been formed, there have been many attacks, they have looked for us, but we have been able to solve it”.

“The reading is very positive. We are very satisfied. The rally we held a few weeks ago was a great opportunity to strengthen our collective work. All the guys have been great today, but I would like to highlight Daniel Lopes, who was involved in escapes, who worked as the most in the bunch and after that work came very ahead,” concludes the director Guillermo Gutierrez.