The cyclist from Granada Carlos Rodríguez equaled Jonathan Castroviejo on Sunday, the only rider so far who had won two editions of the Bizkaiko Itzulia (2004, 2005), after controlling all his rivals in the dangerous last day and validating his triumph in the final overall. An even more special success, as the prestigious Biscayan event was celebrating its silver jubilee.

The Almuñecar rider cemented his second victory in the Itzulia in the time trial of the second sector on Saturday, seven kilometres between Trapagarán and La Arboleda. Rodríguez assaulted the yellow jersey with a marvellous performance that allowed him to lead the race jumping from seventh place. Until the time trial, after the triumph of the escape in an inaugural day where Rodriguez gave 1:42, the Andalusian took small steps forward in the management of the race, sustained by a great work of his teammates.

As it happened in the last edition, Rodríguez made use of his strength in the fight against the clock to ascend to a leadership that he could defend during the last stage without excessive problems. In the almost 100 kilometers with start and finish in Balmaseda, the orographically most complicated stage, the team factor released pressure to a Rodriguez who did not hesitate to move to the attack in the last climb to Beci. At the finish line, where the British Oliver Rees won, Rodríguez would finish third. 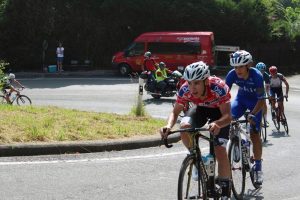 Carlos Rodríguez, winner of the Bizkaiko Itzulia 2019: “It is a pride for me to have achieved this second victory in this race. It is one of the best laps on the national scene, both for its track record and for the level of the runners. I have to thank the whole team for having made this victory possible, as everyone has done a splendid job from the first kilometre of the lap to the last”. The Spaniard adds his tenth victory of the season and also chains victories in two of the most prestigious races of the Spanish youth calendar: the Vuelta al Besaya and the Bizkaiko Itzulia. Only the Andalusian Cristian Rodríguez, in 2013, had achieved it in the same year, while the Russian Alesey Riabkyn won both races, although in different years.

Guillermo Gutiérrez, director of the Kometa Cycling Team: “The evaluation is very positive. Obviously Carlos has done an exceptional job and has been able to play his tricks, but it would not have been possible without all the work of his teammates. Both during the second stage and in the first sector of the third they did a spectacular job. On Markina’s second day, Javi Serrano and Francesc Bennassar got into the breakaway and then Carlos attacked from behind, reached the head of the race and all three did a sensational job. Without that work, this would not have been possible. In Itzulia there were several very powerful teams, such as the British HTM Condor or Zappi, the Portuguese Bairrada, the Bathco,… The Portuguese had three riders among the top fifteen, for example; you had to watch many wheels. The premise for the last day was to control leaks and prevent dangerous people from getting in. Juanjo Rosal has been spectacular”.