After his wonderful performance in the double sector on Saturday, with a double victory and an assault on the provisional yellow, Carlos Rodríguez from Granada won this Sunday the final general standings of the Vuelta a Bizkaia, one of the most important junior races on the European scene. After the recent success in the Vuelta al Besaya by Álex Martín, where Rodríguez finished second, the Polartec-Kometa closes a few weeks of dreams and the success achieved by the Spaniard Tomeu Gelaber for the Foundation in 2015 becomes a reality. 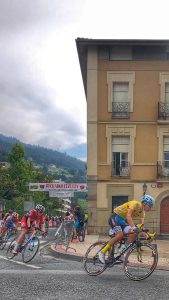 In the last stage, with the beginning and end in Balmaseda, the Andalusian rider controlled all the offensives against his leadership, especially one of the Belgian Wessel Krul (Young Cycling Team) in the last ascent to Beci. With all the attacks tied up in the overall battle, a large first group would end up arriving at the finish line. In the stage Pablo Gutiérrez (Isidoro San Justo) would end up winning.  The rider from Almuñecar, also winner of the general ranking among the first year junior, ended up on the final podium accompanied by the Belgian Krul and the Briton Mason Hollyman (Zappi).

Carlos Rodríguez: “That´s right, I am very happy. It was a very high level race and thanks to all the work of the team we were able to achieve it in the end. The first day, after so many attacks, I thought it was going to be difficult to achieve something; and after the second stage I saw it more or less the same way. But already on Saturday, after the first sector, I saw that I could be ahead if I had a good time. I wasn’t thinking about the overall, I was thinking about a good position. But then came the lead. And for today I didn’t have it for sure because the foreign teams, the Young Cycling Team, the Condor or the Zappi, are the ones that give war every day. But the team has been perfect”.

“We are very happy, very satisfied. The work done by the colleagues on the last day was brilliant. Carrellán and Rosal, in the first part of the race, have controlled very well all the cuts. It was essential to be very careful, we had to control as much as possible. And the team’s been great. Then, in the final, Carlos has been very attentive to the movements of the rivals,” said the director Guillermo Gutiérrez.

Rodriguez, current leader of the Spanish Cup in the category, will now go with the Spanish national team to the European Cycling Championships to be held between Friday 13 and Sunday 15 in the Czech Republic.