The junior team of the Fundación Alberto Contador continues to contribute riders to the Spanish national team of the category with a view to their international commitments. After the presence of Carlos Rodriguez, Fernando Tercero and Raúl Garcia in the combined participant in the Ghent-Wevelgem, the coach Francisco Cerezo has summoned Juan Jose Rosal, Javi Serrano and again Rodriguez to face this next weekend the Paris-Roubaix of the category. Lander Lartitegui, Juan Ayuso and Igor Arrieta (Navarra) complete the team.

The second race of the Nations Cup for young people, Paris-Roubaix faces its seventeenth edition and is disputed on a 111-kilometre track that presents up to 17 pavé sectors that complete 29 kilometres on cobblestones. Between Saint-Amand-les-Eaux and the Roubaix velodrome, where they will arrive two and a half hours before the professionals, the participants will have to manage such famous stretches, and five stars, such as Mons-en-Pévèle or the Carrefour of l´Abre. 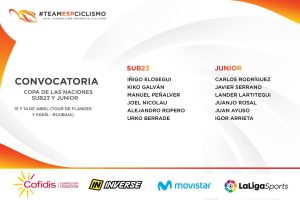 In the 2018 edition, Carlos Rodriguez was one of the main protagonists of the race, signing a very outstanding sixth place at 55 seconds from the British Lewis Askey. “I am very happy and excited to go to Paris-Roubaix again. It’s one of my favourite races, if not the most, despite being one of the most demanding. I hope that the race sensations are similar to last year’s and that I don’t have any mechanical problems, to see if I can get a good result”, said the Spaniard.

The Catalan Juan José Rosal will make his debut, no less happy because of this call: “I love it, the truth! I think that together with the Ronde Van Vlaanderen they are the two most beautiful races to watch and the hardest to run. I have little experience in cobblestones, but I think I am quite skilful on the bike and I hope to do well.  It’s going to be a laying race and to know how to play our cards well, and I hope I’m up to it”.

Javi Serrano from Madrid will also make his debut: “This is my first time and I hope it will be very good. I’m really looking forward to it. It’s the race I’ve always liked the most and I’ve never imagined running it. It’s like a dream”.