Carlos Rodríguez from Granada became the new leader of the Vuelta a Bizkaia Júnior after winning in both sectors that were held this Saturday. 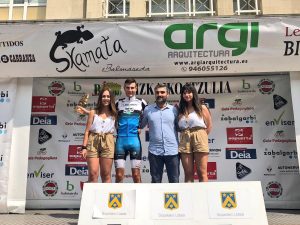 In the morning, in the stage with the start and finish line in Sopela, Rodríguez was the fastest of the five riders who, after escaping, managed to reach the last straight from a group of seven who lost weight in the final part of the race. A first frenetic sector, completed at an average speed of over 42.7 km/h.

His offensive bet allowed him to climb to second place in the general standings, staying 39 seconds behind Belgian Wessel Kruul (Young Cycling Team), who had also managed to get into the breakaway that had taken him to the main pack in more than a minute.

In the afternoon climbing time trial, over 7.2 kilometres, Almuñecar’s performance was marvellous and incontestable, moving the previous leader away in 1:10 and leaving the second leader of the stage (who was also second in the morning), the Briton Mason Hollyman (Zappi), 31 seconds behind.

This Sunday the fourth and last stage of the Bizkiako Itzulia will be held, a day of 88.7 kilometres with start and finish in Balmaseda, with several ports and with the Alto de Beci, second class, 6.2 km from the finish line in the Paseo de la Magdalena. Rodriguez starts with 31 seconds on Krul and 35 on Hollyman.