Carlos Rodríguez, the Polartec-Kometa junior cyclist from Granada, has once again made a great performance for the Spanish national team. At the Trophée Centre Morbihan, the fourth round of the Junior Nations Cup, promoted by the International Cycling Union, Almuñecar won the 100.7 kilometres of the last stage, held between Bignan and Locminé, on Sunday.

“I tried to be in front and at the end, when I saw the opportunity, I attacked and it went well. I’m quite happy because it’s my first victory at this level”, explains a Rodríguez who went on to attack on the 7.2km final circuit, which the cyclists had to give five laps to. “My idea was to advance in the final overall and when I saw the opportunity I tried. The legs have responded, although in the end I suffered”. 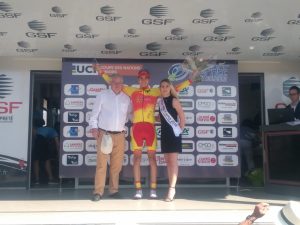 On the finish line, Rodríguez was nine seconds ahead of a first group led by Norwegian Soren Waerenskjold, German Kim Heiduk and Russian Lev Gonov. A group in which he also found his partner Álex Martín and where the Belgian Recmo Evenenpoel, final winner of the Trophée after his first day’s exhibition and the time mattress he got with her, was not missing. Carlos Rodríguez, for his part, managed to move up one place to finish fifth in the final overall, tied on time with Gonov, fourth.

“There had been an attack just before mine and I took advantage of the break to start. I left alone. Behind me I think there was Andrea Piccolo, second overall, and another rider. But they couldn’t get through to me and ended up being hunted by the platoon. Even though Evenenpoel’s team kept pulling I didn’t give up, I kept up my pace and later I saw that the time differences were increasing. Although in the last two laps they cut me out.

Álex Martín, for his part, finished in twenty-seventh place, 5:06 from the winner.