Carlos Rodríguez exhibition in Burgos and Soria. The Kometa Cycling Team rider from Granada became the new leader of the Vuelta a la Ribera del Duero on Friday after winning the second stage alone, where he made a surprising attack on the ascent of Alto de Villaverde, more than sixty kilometres ahead. A performance for the young history of this race. 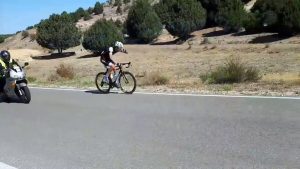 Rodríguez was in second place in the provisional general standings, four seconds behind Dutch Casper van Uden (Acrog Pauwels), after finishing second in the inaugural uphill finish at Curiel de Duero. This Friday, in a totally unexpected development of events, the Andalusian overtook Van Uden, whom he distance in 38 seconds, before the decisive time trial that will be disputed this Saturday with final in Peñaranda de Duero.

Rodriguez go away a kilometer from the summit of Villaverde, the second of the four mountain pass on the route to San Esteban de Gormaz and the most important of all. His colleague Raul García had done a great job of selection on their ramps and Rodríguez did not hesitate to take advantage of it. The Almuñecar began a solo ride during which he had a sale of two minutes. Within the chasing group, in which the Belgian Acrog tried to carry the singing voice with four runners, both García and Juan José Rosal did a great job in defense of his partner. Two kilometers away from the finish line, the advantage was more than one minute; at the end, 38 seconds.

“The truth is that it has been something totally improvised”, explains Carlos Rodríguez. “In the second port Raúl put a very strong rhythm and I chose to dispute the points for the great prize of the mountain. But at that moment I saw that I was going alone and I decided to continue at my own pace, regulating. There was a lot left to finish. Already when I saw that I had options to arrive I gave everything. I’m especially happy for this victory, yes, but it wouldn’t have been possible at all without the work of my whole team”. 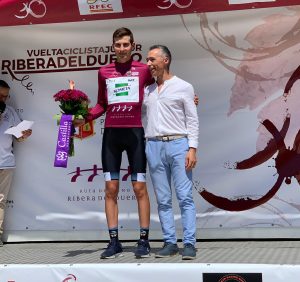 For the Kometa Cycling Team this second stage in the Ribera del Duero had another reading, that of the great work of Pedro Beneit and David Quevedo in favour of Francesc Bennassar. Cesc had punctured at the height of km 30 and both Alicante and Cantabria rider contributed to the fact that the balearic guay moved up positions on the stage and did not stay alone at a time when the race broke up in many groups.

“It has been a day in which all the boys have made an enormous work in the situation of race in which they have been. The victory was very hard work, with a wonderful performance by Carlos. The forecast was to move on to the attack towards the end, but Carlos looked good and Raúl had done a sensational job, pulling very hard and overtaking all the Belgians. From there Carlos has maintained a tremendous pulse and behind Raul and Juanjo have been very well controlling back,” said team director Guillermo Gutierrez.