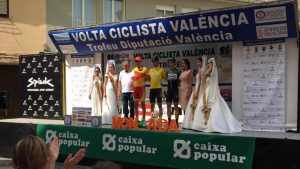 The Granadino of the Kometa Cycling Team, which competed with the Spanish youth team in the Levante round, finally finished 21 seconds behind the leader Simon Carr (Aix-en-Provence). Rodriguez solved the last stage without special difficulties. At the finish line, the Andalusian was precisely the first of the riders directed here by Paco Cerezo, thirteenth.

Raúl García finished fifth in the overall final, 1:01 from the winner. The other two cyclists of the junior Kometa Cycling Team, Fernando Tercero and Javi Serrano, finished 40th and 65th respectively.

Carlos Rodríguez: “The personal balance is magnificent, of course, but I really think it is necessary to highlight the great level that the whole selection has shown. Raúl García also finished in the top ten and both Raúl and Juan Ayuso, who was second on Saturday, and Fernando Tercero, Javier Serrano, Igor Arrieta and Xavier Isasa, did a spectacular job. The most important thing is that we have learned a lot and I think we have done a very good preparation for the next World Championships, where we are confident that we can play a good role”.