Weekend with many competitive fronts for the teams and members of the Fundacion Contado. But of all of them, for the test, for its ecosystem, for its particularities and for its tradition, the sixth place signed this Sunday by Carlos Rodríguez Cano in Paris-Roubaix Juniors is especially worthy of mention. “It has been a very positive experience, I’m really happy,” said the rider from Almuñecar. 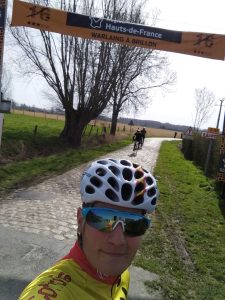 The race, which is held prior to the professional one and is the second qualifying event for the International Cycling Union Nations Cup for its category, linked Saint-Armand-les-Eaux and Roubaix on 111 kilometres marked by sixteen paved areas (28.9 km in total) including Mons-en-Pévèle, Pont-Thibaut and the Carrefour at l´Abre.

The victory was won by the Briton Lewis Askey, who beat the Italian Samuele Manfredi in the sprint. “He has gone very fast all day and in the first sections of the cobbles the group has been selected. About 20 km from the end, Askey and Manfredi attacked. We tried to react later, in the stretch before the Carrefour, and four of us stayed in pursuit. The truth is, I was giving it my all and the Carrefour was hard on me. About ten minutes from the end we were attacked by the Danish [Mattias Skjelmose Jense, in third place], who was going very strong. At the finish, in the sprint with the Dutchman [Edo Maas] and the German [Pirmin Benz], it was fused,” Rodríguez explains.

The Andalusian had suffered a fall in the early moments of the race. “I had to get a good warm-up to get back to the pack,” says the rider, who has had one of his first experiences in Roubaix on a surface with which he has not had much contact. “The truth is that except last year in a championship in Ávila, where there was a 500-metre stretch and a recent competition in Ghent-Wevelgem, although that cobblestone had nothing to do with this one, I have never ridden on pave”. “I like cobblestone. It’s different from what I’m used to, but I like it a lot. Especially the one here, is a pass,” concludes the Spaniard.