Great performance for the Polartec-Kometa junior’s team in the French Tour de Gironde, a race that this year has been focused on its category after several years focused on professionalism. In a prestigious appointment and with pedigree, the Madrid squad has obtained a good spoils of the hand of the granadino Carlos Rodriguez. Overall, a very positive balance. 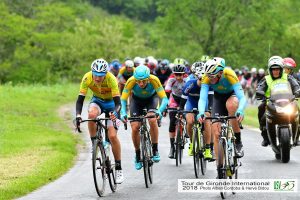 The Almuñecar rider finished fourth in the final overall, 24 seconds behind Frenchman Valentin Retailleau, but is leaving the race with first place in the rankings of regularity and best youngster. Rodríguez, who finished third in the final stage on Sunday, was also the first leader of the Tour de Gironde after winning the initial 9.1 kilometre time trial at Frontenac.

“I looked pretty good. He was in a good rhythm and was aware that he could do well, but he didn’t know exactly where he could be. At the start I tried to set a good rhythm so as not to force my way through the complicated corners of the descent. Everything turned out great in the end. I felt very strong despite losing the jersey in the second sector, and this Sunday we fought to the end”, explains Rodríguez.

“It was a very difficult time because of the wind and the rain”, said the director Guillermo Gutiérrez; “the second stage was very fast. Although we had the objective of keeping the jersey, the team could not be in front at the decisive moments, only Juanjo Rosal and Luis Miguel Mendoza could be in the lead group after several cuts caused by falls. The Kazakh national team was able to move the race from the start. Carlos was heavily guarded, so he couldn’t do anything”.