After his seventh position in the time trial, the Polartec-Kometa junior Carlos Rodríguez from Granada finished third in the route race of the Europeans of his category, held in the town of Zlin on Sunday on a distance of 118.8 kilometres. “It was the toughest race I’ve ever had, but third place made the suffering worthwhile,” said the Almuñecar rider.

The event was dominated by Belgian Remco Evenepoel, who also won the title a few days ago. Evenepoel scored in the early part of the race, in the final part of the first step up the hill that marked out the circuit. Only Rodriguez clung to his wheel and soon the two stood out at the head of the race. 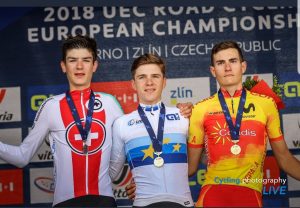 Rodriguez, however, ended up giving in. Alone, Evenenpoel began a battle that ended with the gold medal and almost ten minutes of advantage (9:44) over the Swiss Alexandre Balmer, silver medalist. Balmer was a few metres ahead of a trio in which Rodríguez won the sprint to secure his last medal.

“Remco was going like a motorcycle, at a professional pace. I lasted three laps with him and I couldn’t take it anymore, so I decided to keep up the pace. I was taken by the chasing group, of about 40 units, of which more and more people were staying and there were more and more attacks. In the end, we were down to about six runners. And with six or seven kilometres to go, we were all attacking each other, but with 500 metres to go, Balmer left,” explains Rodríguez.