The cyclist from La Mancha Fernando Tercero became the new leader of the Spanish Junior Cup after winning this Saturday in the V Trofeu 15 d´abril of La Canonja, the second race of the competition. Tercero beat in the finish to Gaizka Ansola, of the Ekin, with which the victory was played after passing to the attack and to consolidate a ten seconds of advantage in the last five kilometers.

Third had been one of the most active riders throughout the day and was already seen in the always demanding chained Coll d´Alforja and Coll de Portell, where he would come out outstanding, head of race, in the company of his partner Raul García and Arnau Gilabert (Antiga Casa Bellsola). At the back, towards La Mussara, both García and Tercero would release their companion, amassing a more than minute advantage over their pursuers. 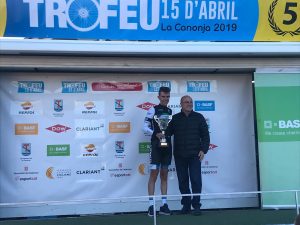 In the very long descent to the finish area, and all the favorable terrain behind looking for the coastline, the leading duo would be hunted by other riders in a succession of regroupings that formed, facing the last ten kilometers, a group of seventeen units. Tercero and Ansola would jump from this headboard package to end up playing the victory between them. Twenty-two seconds later Gerard Edo (Quadis) crossed the finish line, who won the sprint of the group to finish third, beating Raúl García who won the mountain classification.

“I am very happy, a victory is always special”, says Tercero about his first success with the colours of the Kometa Cycling Team after a very outstanding start to the season, with several podiums in the Cabedo Trophy or in the first race of the Spanish Cup, in which he was third. “I wasn’t worried about the win either, because what is important is the team and the results in this sense were coming. And I knew that if we kept working like this sooner or later I would end up arriving. And so it was. The victory came in a small break, which was where I took advantage to start. Ansola took my wheel well and we relieved ourselves to the finish line. Now it’s time to defend the lead”.

This fifth edition of Trofeu 15 d´abril, as an anecdote, was marked by an error in the route made by the whole platoon that forced the judges to stop the race for 33 minutes, being relaunched the race from kilometer 50.