The 2019 season has been one of the most successful of the youth structure of the Alberto Contador Foundation in terms of results. “A direct consequence of the sensational work that all the kids have done, not a goal at all,” says director Guillermo Gutiérrez. The Cantabrian (Reinosa, 1987) joined the team already in his first year and under his command cyclists like Enric Mas, Fernando Barceló, Juan Pedro López or Alejandro Ropero have competed. “At many levels, however, this year’s has been the highest level team I have ever managed”, he said weeks ago. 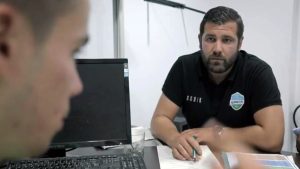 Many victories in the bag of the season, riders already promoting to the professional field and many others in leading formations of the amateur, … Shows that the 2019 campaign has been special within the team.

Yes, it’s going to be difficult to match what we’ve achieved in 2019. It was already complicated, because 2018 was a sensational year too. The bar was very high. But not like 2019, with a higher overall level. But we’ve had the opportunity to enjoy a team that comes along every X years. This litter will be remembered, no doubt. For me as a director it has been a privilege to be able to share the year with them. With the utmost respect for the formations of other years, this last year’s team has been unique.

Our fundamental objective is to train cyclists, but without losing sight of their academic life. Victories are not the important thing. It may sound like a phrase, but it’s the truth. And something that we make clear even in the Campus of Selection that every year we do in Saragossa during the month of September. Here it is worth as much, if not more, to get ahead in your studies than to do well in your careers. To reach the professional squad is very difficult. We give everything to help you to make your dream come true, but what happens if you don’t achieve it? You can’t mortgage your future. You can fight hard. But there are a lot of kids in that fight. What do you get a lot of wins in a year? That’s wonderful. That’s a plus. But just because you make it in the junior class doesn’t mean anything more than that. There are youngsters who have a discreet first year and explode the next year. Even kids who don’t make the team at first. There’s Juan Pedro Lopez. In a few days he will make his World Tour debut with the Trek-Segafredo in the Tour Down Under. He arrived at the team in his second year of youth.

The speaker of the Vuelta al Besaya, the always enthusiastic one, qualified in the prolegomena of a stage, during the control of signatures, that the team was a species of Spanish selection because in it the best ones ran.

You have to understand the context, encouraging the race and giving it atmosphere, but honestly it is an excessive, exaggerated consideration. That message from another point of view can also generate discomfort in other colleagues. And in cycling, more so in youth, we are all in the same boat. There are very good riders and very good squads. Of course, from our point of view, this consideration is not sought after, nor is it something to show off. We are just another youth team, with specific means and a specific calendar that seeks to train cyclists at a time when neither support nor races abound.

Do you think that the setting up of the Foundation’s youth team has contributed to improve the category?

I would like to think that the Foundation has contributed a grain of sand so that the sports structures are more serious, more professional. I don’t mean by this that they weren’t serious before, I mean that the means used were not the same. We give all the facilities to the children: the clothes, all the material, infrastructures, we cover their displacements, we even give them the opportunity to compete outside Spain… From that point of view I do not have any doubt that it has been like that. We seek to professionalize the media, not the kids. They are kids! Fran Contador and all his team fight very hard so that the riders have the best means to fight for a dream. The kids want to come and run at the Foundation, and that desire goes beyond the tug of Alberto Contador’s name. 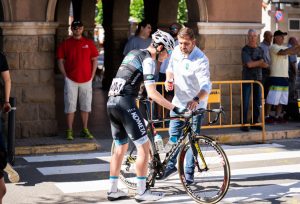 Who has been the best cyclist who has passed through the teams you have directed?

Because of the closeness in time I have to mention Carlos Rodríguez, a cyclist who has made the jump to the World Tour no less and directly. But there are many riders who have passed through the team that have done really well and not to mention it is really unfair. I would like to mention the case of Carlos who made the jump to the World Tour, which was very recent and very popular with the media. From door to door, over short distances, he is an absolutely normal kid, very simple, very discreet.

What is the big problem of the youth category in Spain?

It’s obvious that there is a lack of a calendar and that many appointments are concentrated in a short time. The Spanish Cup, with a consolidated number of events and some classic appointments, is a great initiative. And in Castellon with the Cabedo they are doing a great job. Like in the Vuelta a Besaya, like in the Itzulia, like in the emerging Ribera del Duero,… But there is a lack of calendar. At least from a national perspective. Events such as La Rioja or Talavera have not come up in recent years.  Until the World Cup there is a great drought of competitions and this year has seen the presence of a junior team in the Vuelta a Valencia elite and u23. This lack of days of competition is a problem. And that is also noticed when you go abroad, where you compete in a different way.

What are the prospects for 2020? Any riders to pay more attention to?

Very good, with a lot of desire to start. New sponsors are coming in and we have a very exciting team. Fantastic guys, very eager to start fulfilling a dream. It is true that after an outstanding 2019 this 2020 is presented with many new faces. I can’t highlight any particular boy, although given his experience with us we expect a lot from the five junior riders who were first-year-olds last season, Francesc Bennassar, José Luis Medina, Alejandro Luna, Pedro Beneit and David Quevedo.