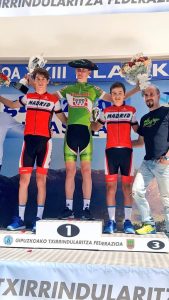 About Marc Brustenga Felix says taht he has demonstrated “be very resolutive at the sprint and we have to bet for him as soon as there is a possibility of arrival in a group. Now he just have to improve on passing the mountain, because then will become a rider capable of winning many races. His speed tip is more than proven”.

Facing the Tour des Portes du Pays d’Othe, Félix García Casas says that this race “is ideal for him, because the climbs are not particularly demanding and the race is ideal for powerful riders, because many times the cuts are made in the flat sections. Marc will be fundamental there and also in the team time trial, along with other specialists like Joan Martí Bennassar and Matíes Gornals”. The sextet that will travel to France, according to their director, “is our gala lineup. It will be completed by Hugo Sampedro, Pol Hernández and Carlos García. Pol has been very good in Asturias, disputing the overall, and the other four, Gornals, Garcia, Bennassar and Sampedro, have demonstrated a great moment in the Federation Trophy. Sampedro and Garcia finished on the podium and the other two entered the first group. In France we have a very high standard, because last year we won the team time trail, but this year we will try to improve that result, because I think we have an even more complete team”, concludes the Polartec sports director.