Tempus fugit. Time is fleeting, as the classics used to say. The season has devoured, one after the other, much of the evidence of the calendar and the continental Polartec-Kometa, in its first year of life, has stood before the third of its three major challenges of its founding course. Due to the great connections of its sponsor Kometa with Hungary, the company has many interests in a country where it has several factories and employs hundreds of people, the Vuelta a Hungría is much more than a competition for the Madrid team.

A Tour of Hungary that, beyond exotic evocations, due to ignorance, dates back to the first third of the 20th century. The first edition was held in 1925 and, avoiding stoppages, upheavals and interruptions, has been held continuously since 2015 after having chained eight editions between 2001 and 2008 and six between 1993 and 1998, the first period that returned to the roads since 1965. “For us it’s our Tour de France”, says Fran Contador, the Foundation’s manager. 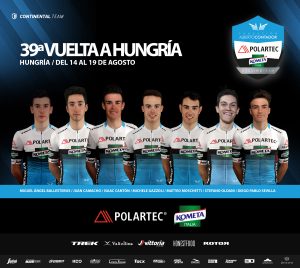 A prologue and five stages, 800 km of route, are the setting where the training sponsored by the Alberto Contador Foundation will seek to be the protagonist of a Hispanic Italian block that condenses the spirit of its staff and its structure. Miguel Ángel Ballesteros, Juan Camacho, Isaac Cantón, Pablo Sevilla, Michele Gazzoli, Matteo Moschetti and the stagiaire Stefano Oldani are the seven riders chosen for an adventure in which the speed of Moschetti, in a sweet moment after his great victory in the Vuelta a Burgos, will be the great asset of the team. Not the only one, though.

The initial time trial in the capital of Lake Balaton, some 100 kilometres south-west of Budapest, gave way to five days where great orographic difficulties were rare. Hungary is not a country of very high mountains: its roof, the Kékestető, or simply Kékes, is almost 1,000 meters (1,014 meters) high. The ascent to the Bükkszentkereszt, which scores first class and is twenty kilometres from the end of the fourth stage, will most likely be the great difficulty of an itinerary with a certain tendency, or several winks, towards the mass arrivals.

Medical statement about Vincenzo Albanese: “I will come back even stronger”.