Javier Serrano from Madrid climbed to the top of the Víctor Cabedo Trophy after a wonderful performance by the Kometa Cycling Team this Sunday in the second of the four races of the race, the Trofeo Entrada de Toros y Caballos de Segorbe. A second stop of this prestigious challenge in which the Madrid team signed a triplet from the hand of Raúl García, also from Madrid, Fernando Tercero from La Mancha and the aforementioned Serrano at the same time that, with a rent close to two and a half minutes over the pursuers, dealt an important blow in the fight for the final general. 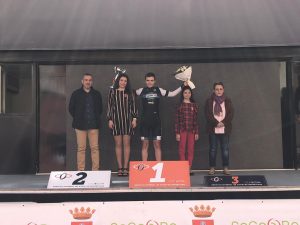 Raul Garcia named the partial success. The one of Tres Cantos made a new great performance of the whole team, with presence in all the circumstances of race along the evolution of a demanding day by the orography castellonense. In the first important cut, the ascent to Mantet, a group of nine riders stood out in the head of the race where up to four cyclists (the until today leader Carlos Rodríguez, Serrano, Tercero and García) gave presence to the team directed by Guillermo Gutiérrez.

It would be the first of several movements occurred in a demanding terrain, full of steep slopes. Accompanied by Brandon Rojas (Bathco), García, Serrano and Tercero would once again stand out at the front of the race halfway through the stage after the winding journey through Torás, Bejis and Teresa. A consolidated quartet at the height of kilometer 59. After a succession of attacks and counterattacks, around kilometer 70 the three riders of the Fundación Alberto Contador would manage to leave Rojas behind to face, relieving themselves perfectly, the final part of the Trophy and confirming its exhibition. 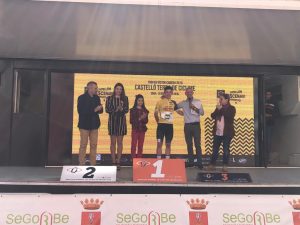 At 2:33 from the winner and his two companions would arrive the Granada Carlos Rodriguez, winner on Saturday and first leader of Cabedo 2018. Almuñecar’s, fourth, stood out in the last bars with Juan Ayuso (Bathco) and Carlos Soler (Infinobras), encouraging a few seconds to a first main group which were also Francesc Bennassar and Juanjo Rosal, seventh and eighth at the finish line. Up to six riders of the Kometa Cycling Team entered the top ten of a race after which it consolidates as the outstanding leader of the overall teams. Rodriguez and Bennassar, for their part, and respectively, remain at the forefront of the regularity and special sprints classifications.

Javi Serrano, new leader of the Trofeo Víctor Cabedo with a six-second margin over Fernando Tercero and Raúl García and 2:24 over Carlos Rodríguez: “On this lap I was feeling very good. Yesterday I felt even worse, but I also ended up feeling good. Today the dynamic has been the same: to feel better and better with the passing of the kilometres. When Raúl, Fernando and I got into the breakaway we went all the way to the finish line. I felt really good, so now we’ll see how it goes next weekend”.

“The team was incredible, out of ten”, said Raúl García, winner in Segorbe. “This was the result of spectacular work by everyone. Personally my feelings have been much better than I expected. Already in the first port there were four riders of the team. When the final cut was made and we were riding with the Bathco rider, we attacked him until all three of us managed to leave”.

Guillermo Gutiérrez, sports director of the Kometa Cycling Team junior: “The race went great, the approach was exactly this. The truth is that this team works like a charm and we must emphasize the work of each and every one of the boys. Even Juanjo Rosal and Pablo Gutiérrez, after yesterday’s falls, have been sensational. Pablo could hardly stop and was the first to work for his teammates”.

The Víctor Cabedo Trophy will continue next weekend with the team time trial on Saturday (6 km with start and finish in Vila-Real) and the Memorial Joan Babtista Llorens (102 km), test that will also be the first of the Spanish Cup in the category.