Javi Serrano from Madrid won his first victory in the Spanish Junior Cup on Sunday after winning the third round of the competition, Barcelona’s Cursa Ciclista del Llobregat. Serrano imposed his top of speed in the sprint that disputed six of the seven riders that integrated the great break of this edition of the Catalan test, an escape in which Carlos Rodríguez and Raúl García were also present. Rodríguez finished third, while García, fourth, was leading the Cup. 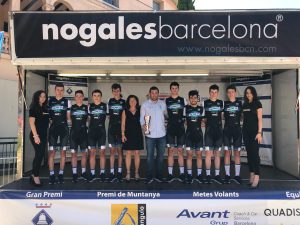 After several attempts to break the race that did not crystallize, with some starring Serrano himself in the first port of the day, it was in the ascent to Alt d’Ullastrell where the gestation of an escape that was crucial in the resolution of this edition of the Cursa. Three cyclists, Javi Serrano, Alejandro Piquero (OID) and Gabriel Rodas (Salchi) opened the hostilities and managed to open a small hole.

Carlos Rodriguez would not take long to reach the head of the race and crown first the top of the mountain. Raúl García, Ángel Casillas (Sanse-Rotor) and Pablo García (Salchi) were also connected. The seven riders in vanguard consolidated almost two minutes of margin on a main group in which the leader until this Sunday rode, the manchego Fernando Tercero, 34º in the finish line at the end. The victory was ahead, where at the same time a change in the leadership of the Cup was gestating.

“I had been finding good sensations for a long time, but the opportunity didn’t come. We came to La Cursa with a lot of desire to do well and in the end everything went perfectly. One more day we have to thank the great work that the team has done throughout the test,” explains a brand new Javi Serrano. “To be leader of the Cup is always something very positive and of course we will have to try to defend it, either with me or with another team-mate, because there are several of us who are very well placed”, adds Raúl García.

Javi Serrano’s victory in Sant Boi de Llobregat keeps the Kometa Cycling Team in full swing in the 2019 Spanish Cup: three races contested, three victories with three different riders. The youth structure of the Alberto Contador Foundation is leaving Catalonia with a new success in the overall teams of La Cursa and the first place of Raúl García in the classification of the intermediate sprints.