August has been a very busy month for the Spanish teams for the sports structures supported by the Alberto Contador Foundation. In addition to the presence of the Andalusian continental Juan Pedro López in the Tour del Porvenir or the’sub23′ of the Balearic Islands, Joan Martí Bennassar in both the Absolute and U23 European Championships, the participation of Javi Serrano from Madrid with the junior national team in his category in Aigle (Switzerland) is also added.

“It has been a very nice experience, but luck has not been on our side. I’m left with having been in the omnnium fight until the end,” Serrano says. The junior of the Contador Foundation took part in the omnium and madison events, with uneven fortune. But a great learning experience as a baggage”. 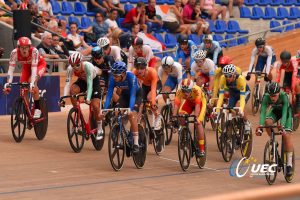 The omnnium is a test whose classification comes from another four (scratch, tempo, elimination and points) and in its final classification Serrano finished in eleventh place. “In the scratch I felt very good and I did second, with ten laps to go I went with the one who would be the future European champion. Then in the tempo test, which was also a tough test, I felt pretty good. The problem was that nine guys took turns. With two laps to go I started and finished first in the pack, tenth in the race”.

The appearance of a few tenths of a fever in the face of the dispute of the following test affected Serrano’s performance in the following test. “I wasn’t feeling very well and in the end I was eliminated from the first ones. I finished 23rd and dropped a lot of positions in the general classification. A little recovered, I did a good scoring race. I attacked several times, and even took a lap, but I didn’t get into the medal fight. But I ended up doing well, fighting with the best,” he recalls.

Serrano’s presence in the Aigle Europeans ended prematurely on Sunday.  In the early stages of the race in Madrid, where the Spaniard was paired with the Spaniard Joan Albert Riera, the Mallorcan cyclist suffered a fall that caused him a broken collarbone.