The Mallorcan Joan Martí Bennassar is one of the junior riders who will continue in the category next year with Polartec’s colors. After a first season in which the responsibility fell on the elder ones, now it’s up to him. In the Way of St. James has already shown of what wood is made, enduring to the end even though he was one of that most suffered the problem of blisters. Nothing stopped him and in the end he found his reward. “For me it was a great challenge. The track has been very hard for the kilometers we have done in such a short time. Most do this in more stages, but I’ve also had a really, really good time, I’ve met the new riders of first year and also many U-23s that until now I only knew by sight”. 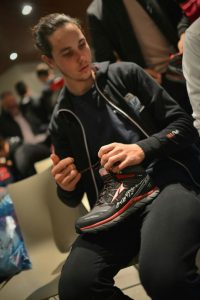 Bennassar says that he expected a Way of St. James “as I imagined it, very green, between forests and small towns, a road as we have lived it, very rural, very beautiful and at the end with the satisfaction of arriving to Santiago, see the Cathedral and get the Compostela”.

Among all the days, the one that enjoyed the most was the first, “because I was more fresh and I could appreciate the landscape more. And I also liked the last stage, which we started at night, with the novelty of the headlights, it was different from all other days. It was fun to go with everyone else walking at night, although it was very hard because was the longest stage”.

He liked the Way of St. James liked because throughout the stages, “I have known the teammates quite well”, says the Mallorcan. “With the passing of the days you are talking to different riders, also with the foreigners in English, which is another challenge, and with the U-23, with whom I had never had that opportunity. It has been interesting”.

It was also interesting to pass and overcome some moments of doubt during the Way. “I don’t know if the others passed them, but it was hard at some moments, although that’s when you realize that it’s all mental, that it’s about going through that bad moment and motivating you again. The Way of Saint James has also helped me to know that many times you have to suffer, because then you pass that point and continue forward”.

Joan Martí, like most of the group, had also prepared his request to Santiago when he entered the Cathedral. “The first thing we did when we entered was to see the church and then we went to embrace the Saint. I asked him to be full of both individual and team success this year”. And, of course, he didn’t miss the opportunity to get the Compostela. “I’m going to hang it in my room. It’s the proof that you’ve done the Way of St. James and I like it”.