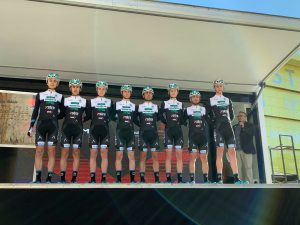 The last test of the Cabedo, also second test of the 2020 Spanish Cup of the category, as well as the definitive general one left for the Juan Ayuso’s bag. The alicantino of the Bathco, that made a full of victories in this edition, happened to the attack in the ascent to Infantería and little by little was consolidating a hollow that at the end touched the four minutes on its more immediate persecutors. Arnau Gilabert, ninth, and José Luis Medina, fifteenth, were the first members of the junior team of the Alberto Contador Foundation to cross the finish line. Medina finally finished fourth in the overall final of the Trophy, six seconds from the podium.

The Balearic Islands’ Francesc Bennassar and Alicante’s Pedro Beneit were in charge of giving the team presence in some movements that took place during the first half of the day. The two together, in fact, would come to integrate a break of five units. The arrival at the Alto de Infantería, the usual hot spot for this event, which counts towards the Spanish Cup, completely changed the course of the race. In their ramps Juan Ayuso passed to the attack and Arnau Gilabert was between the riders who tried to cover that hole.

The Alicante rider left alone, with a growing advantage, while behind was a group of eighteen units where the Kometa-Xstra had a quadruple representation: Gilabert, Medina, Antonio González from Soria and Alejandro Luna from Madrid. Jorge Gutiérrez and Pablo Carrascosa, who accompanied Ayuso on the final podium of the race in Castellón, were also among those riders.

Guillermo Gutiérrez, director of the Kometa-Xstra junior: “We wanted to repeat the idea of the race we had yesterday at the Trofeo Castillo de Onda and try to find a movement with José Luis to try to attack the third draw of the podium. Francesc Bennassar and Pedro Beneit have been very active in the search for the cuts. And both Arnau and José Luis were in the lead again when Ayuso started. Both Jorge Gutiérrez and Pablo Carrascosa ran well and left no margin for losing their podium place. Ayuso has once again shown that he is one step ahead of the rest of the riders in the category, for us it is inevitable that we won’t remember Carlos Rodríguez from the two previous seasons”.