The Sevillian cyclist Juan Pedro López was the guest of honour of the seventh edition of the Campus de Selección ‘La Mafia se sienta a la mesa’ which took place last weekend in Zaragoza. The future Trek-Segafredo rider, who took part in two editions of this Campus until he was selected to join the youth team of the Alberto Contador Foundation, gave a talk and shared ‘pedaladas’ with the thirty attendees on this occasion. 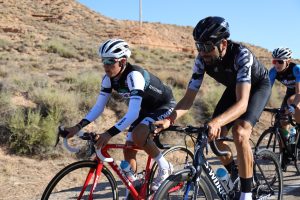 “The Foundation is like my second home, during the last five years I have spent more time here than with my family. For me the Campus has always been a very special event. The first year I could not join the team, but I had no hesitation in coming back a year later to fight for my dream, which was to be selected and start the road to one day reach professionalism,” said López before a very attentive audience.

The Andalusian rider, the first to reach the WorldTour category after having passed through this Campus, subsequently received a multitude of questions during a question time in which he deepened his training routine, his first years in the competition, his adventures in the amateur field, the regret of losing the leadership of his teammate Kevin Inkelaar in the last stage of a race by a few seconds, as happened in the Giro del Valle de Aosta 2018, or the management of a leader in a stage that had become complicated and in which he managed to keep the situation under control, a circumstance that happened in the Bidasoa Itzulia, his last test before jumping to the professional field.

“My dream has always been to be a professional cyclist. Now we have reached the WorldTour category, I am still in a cloud. But I’m also fully aware that I’m starting from scratch and that I’m facing the most difficult yet: to make a place for ourselves in the elite and stay in it,” continues López. The guy from Lebrija remembered, questioned about it, how when he was younger was football the main sport he played (he is a great supporter of Real Betis Balompié) and also how when he decided he wanted to compete on bicycle did not mind having to face certain sacrifices related to time spent with friends. “You always like to be with your friends, have fun with them, and more at certain ages, at first not being able to do it always costs a little. That’s normal. You are very young. But that doesn’t mean giving up your friends”. 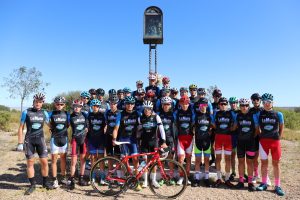 The questions and concerns of the young participants in the Campus, alternated with many photographic posing, especially selfies, continued during the bicycle ride that started from the facilities of the Hotel Hiberus to the climb to the monument dedicated to the Virgin of Dorleta, patron saint of cyclists, located near the town of Jaulín. Javier Floristán, CEO of the group ‘La Mafia se sienta a la mesa’ whose support makes the celebration of this Campus possible. Before the Virgin, López participated in the traditional floral offering.

Always grateful for all the support of the Alberto Contador Foundation, López also highlighted the fact that trips or experiences abroad, which are already beginning to take place in youth training, make you mature very quickly. “I have learned a lot within the Foundation, I have grown as a person and as a sportsman. I emphasize that difference. In the end you go beyond being a very good cyclist, it’s about training people, making them grow. The Foundation gives you a lot of experience. Maybe a 16 or 17 year old doesn’t just go on a trip abroad. I remember how as a youngster I had the opportunity to compete in Belgium. These are unforgettable experiences”.