“Very hard, very hard, it’s become very hard.” Raul Garcia synthesized with those words the experience of facing the road race of the Spanish Championships of the junior category after a long journey from German lands after having competed during last week in the World Track Championships of his category; a world appointment in which he hung a bronze in the Score and fought for another medal in the Scratch. 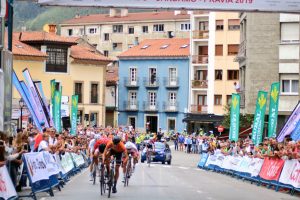 Six cyclists faced the fight for the title, three of them members of the youth team of the Alberto Contador Foundation, and four ended up standing out in the last turn, slightly ascending.

With a minute of margin on the main squad with five kilometers ahead, the new ownership of the red jersey was a matter to be settled between Carlos Rodríguez, Raúl García, Fernando Tercero, Pablo Carrascosa (embryo of this group after climb the Cabruñana alone), Juan Ayuso and Igor Arrieta.

Alicante’s Ayuso remained at the front of the group in the last few laps and launched his sprint after a last curve in which neither Arrieta nor Madrid’s García had real options to beat him. Carlos Rodríguez, after having suffered a puncture and having been forced to chase for twenty kilometres, could not get more involved in the fight for the medals and finished fourth.