The maxim is a recurring one, but it is no less true for being a cliché. Reaching professionalism is very complicated. The path is exciting. But difficult. In the sports structures of the Contador Foundation we try to make this journey as easy as possible with all the material and human support. The objective is to train good cyclists, but without ever losing sight of the fact that we also, and no less importantly, train people. That is why a lot of emphasis is placed on the curricular aspect. And, of course, the importance of maintaining certain values.

You can be a better or worse cyclist, but above all you are human and there are values that make us better human beings. Marius Knight-Chaneac is one of those boys who shared the dream of one day reaching the professional level, but the second year youth rider of the Contador Foundation has decided to abandon the competition. In the pursuit of that dream, although competition is not the priority within the youth project, self-demand can be a double-edged sword. For Marius it has been.

“The confinement was very detrimental for me. The confinement is the basis of the whole spiral of negativity that can take hold of me. In the cadets I had worked very hard because my goal was to join what for me is the best team in Spain in the category, that of the Foundation. When I achieved it, it was a great joy, but at the same time that I was very excited, I also became very obsessed. My whole life was cycling. I thought about cycling all day long. The confinement saturated me a lot, mentally I exploded, I started to eat a lot, uncontrollably, and I suddenly put on a lot of weight, about twelve kilos. Then I had eating disorders. Guille and Jorge, the director and the trainer, were very concerned about us, whether we were well, how we were doing, if we needed to talk… Perhaps out of fear, I never told them about my situation,” he explains. 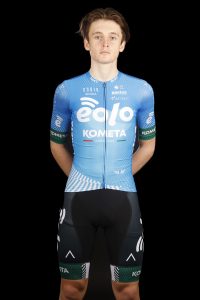 “It was a mistake, no doubt, because the whole team at the Foundation always supports us in everything. In the moment, when you are the protagonist, it is not easy to ask for help. It was much easier for me to channel it afterwards, but it’s clear to me that I would have had to ask for help before. Why didn’t I do it? Maybe because I was new, because we hadn’t race much yet, because I thought I didn’t have the confidence with Guillermo, with Jorge or with my teammates… We all got on well, but I felt that we didn’t have the confidence to deal with these issues. I didn’t do it at home either. I didn’t talk to my parents. I didn’t talk to anyone, really…,” he adds.

Knight-Chaneac was one of the riders selected at the 2019 Campus de Selección. Last season, despite the exceptional nature of the pandemic, the Andalusian by adoption, who is British and French, put in an outstanding performance in the first edition of the Challenge Ciclista de La Subbética. “It was my best sporting moment, without a doubt. Although I had come from hard times. In the summer I was so saturated that I took advantage of the fact that my parents were going to the north of France to cycle up from the south, from the family village. It was five days of bikepacking and that, I think, allowed me to get to Subbética well and with a fresh mind. I had a different attitude. Since November, working with the new coach, the truth is that everything was going well, I was making good progress, I looked good physically… but suddenly I got back on the same path, I was having eating disorders again, I was overwhelmed with food… One day I had a four-hour training session, at two o’clock I stopped in a ditch, I started crying, I called my parents to pick me up, and I realised that it was better to stop”.

“I think it’s important to take into account these mental health issues, complications that catch you unawares, that you don’t know are going to happen to you. In fact, I remember a year or so ago seeing a report on a similar subject and I thought ‘wow, that can’t exist, it’s not true’. And look, karma. I’ve always had a good relationship with food, I’ve never had any weight problems… But it’s something you don’t see coming, it hits you all of a sudden and you don’t know what to do. You have to ask for help. Talk. Guille, our director, was always there to help us. But I didn’t dare. In cycling, in sport, in life in general, there is little talk about this. And since it’s not talked about, it’s not associated. You don’t know what happens to you. It’s not easy. We live in times of potentiometers, times in which a generation of young people, very young people, are in the elite and that lead you to think that if they can do it, why can’t you, even if you are not like them… things that give you an extra pressure that not everyone can manage correctly. It’s good to have goals. It makes you move forward, it motivates you… but there is a line that, if crossed, can be dangerous. Don’t be afraid to ask for help, to speak up, that’s the message I want to get across”.

“For me, being part of the Foundation’s youth team has been one of the best experiences of my life, I value it very much. The treatment of the whole team has always been wonderful and we were able to work with all the material and human support. The companionship, the teamwork… Many things. The team has given me another perspective of Spain and of the Spanish way of being. I have fallen in love with this country. In the Foundation they have helped me when my dream was to be a professional cyclist and they have also supported me when I finally told them about my situation and how it has changed the way I see my relationship with cycling,” he concludes.