The Hungarian rider Márton Dina will reinforce the squad of the Kometa Cycling Team from the next June 1st, as announced this Monday in Budapest in an event attended by Giacomo Pedranzini, CEO of Kometa, and Ivan Basso, sports manager of the team. The Magyar cyclist, who celebrated his 23rd birthday on April 11, stands out for his climbing skills. Coming from the structure of the Pannon Cycling Team, Dina (Budapest, 1996) has signed this season an eighth place in the overall final of the last edition of the Tour de Rhodas, finishing third weeks ago in the Turkish Grand Prix Gazipasa, a performance that provided the first UCI points this season for his country. 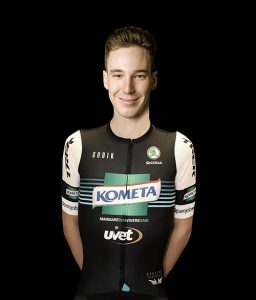 “Honestly, I still can’t believe that I’m going to be part of the team of two great champions like Alberto Contador or Ivan Basso. It’s like a dream. It’s a challenge and a motivation. And a very important leap for cycling in our country. It’s a great opportunity, because we talk about some of the best teams in the category, I’m looking forward to compete,” says Dina, who becomes the twelfth rider of the continental team.

The new Kometa Cycling Team rider comes from a family closely linked to the world of winter sports. His parents, Péter Dina and Zsuzsanna Wenczl, as well as his paternal grandparents, Károly Dina and Erzséber Rudvig, have competed on a national level in different skiing modalities. The young Márton, student of Communication at Budapest Metropolitan University, entered the world of cycling ten years ago with the hand of mountain biking, a discipline in which he deepened his presence to become an outstanding cross country rider at the national level. In 2018 he faced his first full year in road cycling. “A dream, no doubt, is to be able to work in the world of journalism, but my dream of being a professional cyclist is much stronger”.

Dina’s arrival is the next step in the Kometa Cycling Team’s bid to help the development of cycling in Hungary. A commitment that had previously materialised with the presence of Hungarian riders in the pre-season training camps that took place both in mid-December 2018 and at the end of January 2019 at Oliva Nova Beach & Golf Resort. Ferenç Szöllosi (1998), Hunor Mate Kiss (1999), Karl Adam (1999), Gabor Molnar (1999), Abel Meszaros (2000) and Ballint Varga (2001), some doubly, were the protagonists of these opportunities. “Hunor told me very well about the great professionalism of the team at all levels and how good the experience in the training camps was for them”, adds Dina. 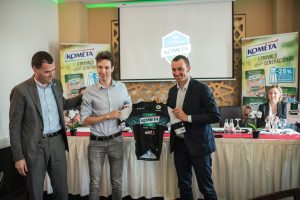 “We believe in the potential of Hungarian cycling. It’s a bike that has a lot of room for growth and has a lot of young riders who can say great things in this sport. This evolution always requires resources and confidence. In the continental project of the Fundación Alberto Contador we go hand in hand with Kometa in this bet”, explains Fran Contador, general manager of the team. “We have contributed our grain of sand and now we take a step further. A few years ago it was unthinkable to think that a rider from a country like Slovakia could win several world championships, victories in the Tour or the Vuelta or many of the most prestigious races in the world, as well as monuments like the Tour of Flanders or Paris-Roubaix. Peter is gifted, an absolute talent. Why not think that there isn’t a future Peter Sagan or a future Alberto Contador in Hungary?”.

The sporting management of the Kometa Cycling Team has yet to define in which race the debut of its new rider will take place. Looking to the future, Dina has her dreams: “I would like to be able to win the Tour of Hungary some year. It’s a great race that doesn’t stop growing from year to year. Already last year I felt very strong, with good legs, when I was fighting for the overall mountain”.