The Madrid cyclist of the Kometa Cycling Team Javier Serrano completed an outstanding comeback in his participation in the Omnium of the European Track Cycling that are being held in Ghent (Belgium), a performance under which he could climb to third place on the podium. The Dutchman Casper van Uden won the gold medal, while the Pole Szymon Potasznik won the silver medal. Serrano, for his part, finished with 106 points in the final standings and was only three points behind Potasznik’s mark.

Serrano made his assault to the bronze in the final test of Points Race, an appointment in which he started in ninth place in the provisional classification and during which he was progressively moving up positions imposing in four of the eight sprints set. 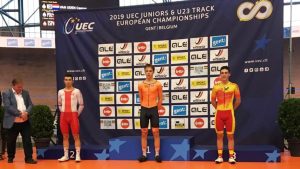 The day had not begun badly for Serrano, with a second place in the Scratch competition that seemed to postulate him consistently for the fight for the continental title of the specialty. But seventh place in the Tempo Race competition, a competition that kept him in provisional fourth place, and above all fifteenth in the Elimination, seriously hampered his aspirations.

“The scratch is very good and I could do second, then in the tempo I could be with the best, but the elimination is a test that gives me very bad and I could only be 15, so there was no other than to be brave in the score. I’ve been riding approximately 40 laps alone and, although I couldn’t win a lap, I did score a lot of points in the sprints”, explained the rider in statements to the Spanish Cycling Federation.

With 5 laps to go I was taken by Sam Watson, who was also fighting for the bronze, but I was able to beat him in the last sprint. I am very happy. I came with the intention of doing well, because we have been training hard, but I did not expect this. I took off last year’s thorn, which I also started strong in the scratch, but then I was not good,” tolds.