La Cursa del Llobregat, a legendary event on the cycling scene in the youth categories, will recover this Sunday a Spanish Junior Cup that faces its third race with Carlos Rodriguez as leader of its classification. The Polartec-Kometa rider from Granada is, in a way, the cyclist of the moment in the category, without the desire to fall into complacency or imposture. His recent stage victory at the Trophée Centre Morbihan, where he finished fifth overall, or the consistency he has shown during his first year in the category, support that perception. However, Almuñecar’s son escapes from these evaluations, which are alien and distant to him. “Despite the results, I don’t consider myself a favourite for any race because there are many well-prepared riders. I will continue to work as usual, and I don’t have any pressure”, he says without any doubt. 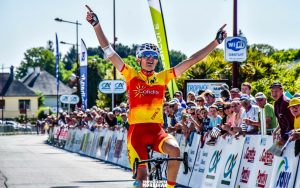 La Cursa del Llobregat is a classic, in its broadest sense. A trajectory of almost forty editions with illustrious winners in its list of winners. The route, which was initially very winding, features two high points for the mountain grand prix: Vacarisses and l´Ullastrell.  The last few kilometres are also covered by a slight climb. Álex Martín, who was the first leader of the Cup and currently occupies the second provisional place, will also be of the game in a Polartec-Kometa completed by Joan Marc Campos, Manuel Jesus Carrellán, Daniel Lopes, Luis Miguel Mendoza, Miguel Patiño and Juan Jose Rosal.

Catalan Rosal reflects on this race: “Sunday’s race looks like a very fast race, with a rising start where many dangerous people are going to try it from afar. We arrived both with the leader from Carlos, who is in spectacular shape as he has been demonstrating these last two weeks in UCI tests, and second place from Alex Martin, who is defending himself very well in climbs such as the long climb of the day. With this approach you will have to run with your head. And by doing a good team effort, like the one we’ve done so far, we’re going to give it our all to help them and keep the jersey and second place, and one of the most important things, team leadership”.