The seventh edition of the Alberto Contador Foundation Selection Campus returns to Aragon in 2019. Zaragoza, with the fundamental support of the restoration group La Mafia, will once again host a campus that this year reaches its seventh edition. A seventh edition that will take place between 6 and 8 September and for which the registration period has already opened, which will close on 22 August.

Between thirty and forty attendees on average have taken part annually in past editions of the initiative, and even some young people, such as Alejandro Ropero from Granada, have come on two occasions after not being elected to the first. “Whether you are selected or not, of course it is an experience that I recommend to everyone, is one of those experiences that are not forgotten, unique. Luckily, or unfortunately (laughs) I could go twice. And those two years in Zaragoza I had a great time”, explains the Andalusian rider today in the U23 team of the Kometa Cycling Team. 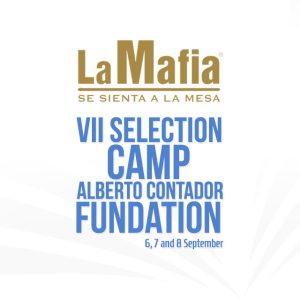 “The Campus is a unique experience. For three days you meet a lot of people you befriend. I’ve shared a platoon with kids in both the junior and U23 categories who passed through the Campus and it’s undoubtedly very positive to have been able to share that experience. Beyond being chosen or not, also that aspect of meeting new people, of being with people with whom you will share races … It’s a different weekend. Games, activities, personal interviews… We all go with the illusion of being among those selected, of taking steps in cycling and reaching the top, but beyond that the experience itself is wonderful,” adds Ropero.

The cyclist from Otura, second in the overall final of the 2019 Spanish Cup and winner of the first stage of the demanding Vuelta al Bidasoa, had the opportunity to run as a stagiaire in the ranks of the Kometa Cycling Team of the entire continental Tour of Burgos in August 2018.

“The Campus is one of the pillars of the Foundation’s sports project; it is the best tool we have to detect cyclists. So far it has given us very good results. It is a very novel idea in which we not only look for the sporting potential of the cyclist, but also a more personal and social aspect of the children, how they are or how they relate to each other, looking for personality profiles appropriate to our idea of project and team,” summarized Félix García Casas, Sports Manager of the Foundation for the last edition, a few words that are still perfectly valid. “With the passing of time, the idea that we do level tests, physical tests, has been discarded. That’s why we already have his sporting track record. In these early ages, what we often have to look for is committed young people, with desire, who bet on a project and who start to have an idea or an objective of being a cyclist. And they want to start a process of training and progress with us.