In the fourth edition of the Trofeu Vila de Ripoll Juan José Rosal showed his good moment with a new victory that gives continuity to his recent triumph in the junior event of the Circuito del Guadiana. The cyclist from Girona beat the sprint within a reduced group of about fifteen units that reached the last kilometre of this race for the Catalan Cup held this Sunday on a route of 84 kilometres, two laps to a 42 track that included the ascent to Coll de Santigosa (1064 m).

Beyond the victory of the Kometa Cycling Team junior rider, a good part of the protagonism of the race fell on his colleague Gerard Bofill. The cyclist from Banyoles was one of the great animators of the race with his bet for a leak along with two other riders that would not be neutralized until the last descent, at the end of a day with a really demanding track.

“I felt very good in my legs,” says Bofill. “I escaped in the first pass of the day and I was escaped for a large part of the race. In the end the joy is double because Juanjo won in the general and I won in the general mountain”. 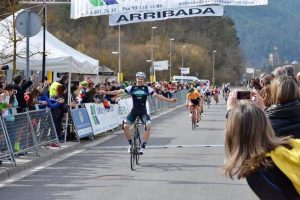 “It’s a race with quite a difference in level for what usually exists”, stands out for his part Rosal, new leader of the Catalan Cup category. “With a kilometre to go to the last port, more or less, we have reached the head of the race. There would be about fifteen kilometres left. In the descent there have been many attacks. With 500 metres to go, three riders attacked, I went out to cover the gap and I started straight away”.

This great performance in Catalonia gave continuity to the good performances of other junior riders of the Kometa Cycling Team during the weekend. On Saturday the Alicante Pedro Beneit and the Balearic Francesc Bennassar returned to be protagonists.

Beneit was the first among the riders of the junior category in the Interclub Vinalopó event held in Villena. On 83 kilometers of route, in a squad shared with cyclists master 60, master 50, master 40, master 30, elites and sub23, the cyclist from Alicante signed the 34th final place, first of its category, 56 seconds of the winner Hanza Yacine.

On the island of Mallorca, on the other hand, in a Trofeu Ses Salines over 97 kilometres, Francesc Bennassar finished tenth in the race, 6 seconds behind the winner Tom Fitzpatrick and Marc Buades, second at the finish line. Bennassar was the first of the junior riders to take part in the race.