Four out of four and with four different riders. The Kometa Cycling Team junior extended its idyll this Sunday with this edition of the Spanish Cup category thanks to the victory of Pablo Gutierrez in the Memorial José Luis Junco de Unquera. The Cantabrian cyclist, who was thus greeting the success of his teammate Carlos Rodríguez in last year’s edition, was the strongest within the escape that managed to reach the last steep slope of a very demanding course for his dispute over a track truly ‘leg breaker’. A start in the last few meters allowed him to take a few meters and cross the finish line with a second advantage over Pablo Carrascosa (Ebora Cycles). 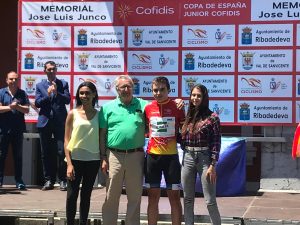 A race in which the breakaway triumphed. The breakaway would begin to take shape in the first third of the day after the second intermediate sprint. At the height of kilometre 30 there were already seven riders ahead, among them Gutiérrez. Ten kilometers later, the group would grow to ten units and would achieve a rent higher than the minute with a certain speed. The presence of many formations in that breakaway (which would finally stay in nine riders in the run-up to the second pass through Unquera), and the absence of outstanding runners in the general fight for the Spanish Cup, generated a certain calm in the main bunch and the difference shot up over four minutes.

A mattress of really outstanding time that will decrease in the following kilometers before the irruption of some frictions in the head of the great group, accelerations within the last 25 kilometers of which was part of the leader Raul García. The vanguard of the race also lost some units and remained in seven members, finally five in the last kilometers. Interspersed between the breakaway and the platoon together with Jorge Gutiérrez (Ciclos Ebora), García would end up reaching some members of the breakaway in the final steep to finish seventh, 52 seconds from his teammate, and add 33 new points to reinforce his leadership. “The pack had broken a lot, we were very few and we tried our luck to see if we could get to the front, but when we started the head of the race was more than two minutes away,” explains García.  The finishing touch to Sunday would be the victory of the Kometa Cycling Team in the general standings by squads. 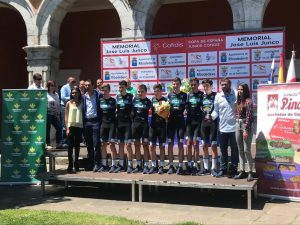 Pablo Gutiérrez, after his first victory in the Spanish Cup: “I’m very happy, the whole family was here and could be a witness director. We were very clear that we had to have presence in the leaks, while Raúl, Fernando, Carlos and Javier had to be controlling from behind to test it later. I was lucky that I took the good leak. As we were a lot of riders we agreed on everything and we got a good income. This is a very repechera race, very ratonera, where there are not many zones to roll, neither you have visual references and it is not easy to cut time”.

In the overall Spanish Cup there is no change in its upper zone and Raul García remains at the front, followed by his teammates Fernando Tercero, Carlos Rodríguez and Javi Serrano. The next test, penultimate of the competition, within a month of San Sebastian de los Reyes (Madrid).