Carlos Rodríguez (Polartec-Kometa) from Granada finished third this Saturday in a new edition of the Beasain World Preview Classic in which the Basque Jon Barrenetxea (Gastronomía Baska-Avia) won and where the Polartec-Kometa won the squad classification. 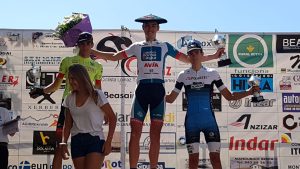 Rodríguez, Barrenetxea and Iván Cobo Cayón (Aseguradoras-Produque) stood out at the top of the race during the second climb to Olaberria, the last of the four orographical difficulties of the day and with the top six kilometres to go.

The three men who would play for the victory stood out in turn from a dozen units that, with the’polartec-kometa’ Álex Martín also present, had been formed during the demanding and always decisive ascent to Mandubia, the penultimate of the day’s menu.

Until that decisive phase, the race was led for many kilometres by two runners, Mikel Retegi (Lizarte-Ermitagaña) and Josu Etxebarria (Intersport). Polartec-Kometa and MMR were the two formations that worked hardest to reduce a maximum difference of around three minutes.