Madrid’s Raúl García reached the bronze medal this Friday in the World Track Points Race of the junior category being held in Frankfurt (Germany). The cyclist of the Kometa Cycling Team finished third, with 51 points, the same as the French Kevin Vauquelin, silver, and eleven less than the new continental champion, the Russian Vlas Shichkin. 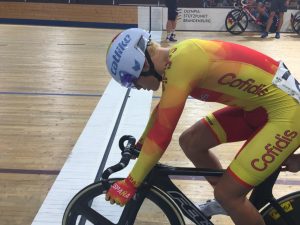 The rider from Tres Cantos, who had qualified hours before for the fight for the medals after winning his qualifying series, ran with ambition and led the test for much of its development.

“I am very happy because I ran to win and a bronze in a world championship is not won every day, it is a dream come true”, explains García from Frankfurt. “I already had a fourth place, so I went out to win. I got back very early in the race and in the end I got even with Shichkin. You had to run to win. With 8 laps to go, after a hard attack by the Russian, I riveted him and went alone. I opened a hole and they caught me one lap from the end”. 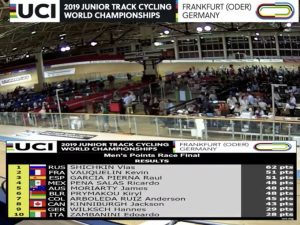 The bronze medal comes one day after the fourth place mentioned by the Kometa Cycling Team rider in the Scratch event. Garcia had managed to finish first in the race, but was relegated to that position for riding the blue strip of the velodrome. “I did very well throughout the race. In the end, as we entered the group after winning the lap I got down, I was locked up and the only option I had was that. I imagined they were going to relegate me; you have to assume it and that’s it”, explained the rider at the time.

A day earlier, on Wednesday, García, his team-mate Javier Serrano, Alberto Pérez and Jaime Romero had set a new Spanish record in the Team Pursuit event. Although the quartet was far from the medals, they finished twelfth, their time of 4.11.914 served to break the 4:13.201 record in force since 2015. That new record has motivated the blond hair that García was wearing this Friday. “It was a bet to achieve the Spanish record”, he says.