The Murcian town of Cieza welcomed during this weekend the first edition of its lap by stages conceived for the junior category, a new race in which Raúl García registered his name as the first winner. The Madrid cyclist also scored the secondary classifications of the mountain and intermediates sprints and was the spearhead of the success by squads of the Kometa Cycling Team. 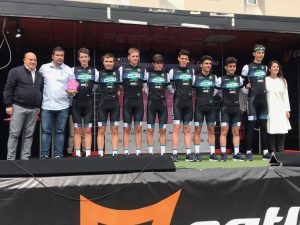 The junior rider of the Alberto Contador Foundation based his triumph on the four kilometres of individual time trial of the second sector on Saturday, where he overtook his team-mate Francesc Bennassar in 10 seconds and Gerard Bofill in 11 seconds, as well as ‘kometa’ Gerard Bofill, Javier Ibáñez (Soy Ciclismo), Álvaro Polo (Cartagena-Patatas Pijo) and Miguel Ángel Mera (MMR Academy). In the morning line stage Bennassar had finished third in the volata where José María Martín (Valverde Team) imposed his speed.

This Sunday, in a stage in line of almost 80 kilometers, García shored up his leadership in the ramps of Alto del Ricote, with its summit located fifteen kilometers from the end. There Pablo Carrascosa (OID Cycling Team) attacked and the rider from Tres Cantos reached him before the summit. Together they would march to the finish line, where they would arrive with half a minute over the first pursuers and one over the first main squad.

“It’s been a pretty tough race,” explains Garcia. “The port became quite hard, especially on a second part of a narrower and winding road. That’s where the race blew up. I’m very happy because I had enough legs to catch Carrascosa and beat the sprint. The sensations have been very good and I am very grateful for all the work that my teammates have done”.

Guillermo Gutiérrez, sports director of the Kometa Cycling Team junior: “The team has worked very well in this Vuelta a Cieza. It has worked in favour of Raúl, to be able to take him further in the port. Our great strength is in the collective and that is what we always try to work and instill”.