The Madrid town of San Sebastián de los Reyes became the Mecca of junior cycling on Spanish soil over the weekend due to the celebration of the penultimate round of the Spanish Cup. A complex date, which overlapped with the Europeans in the category and with a return to high level stages like the French L´Ain, a coincidence that caused casualties both by the selection and by the commitments of the Polartec-Kometa in France. Carlos Rodríguez from Granada would win the bronze medal in the Czech Republic. The Catalan Álex Martín, after his offensive bet, would assault the leadership of the French race. 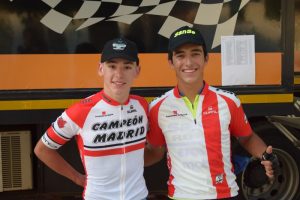 In San Sebastián de los Reyes, the Catalan Juan José Rosal was the best of those classified in the Polartec-Kometa. Rosal was involved in the sprint of the group that came in at 3:21 from the winner to finish thirteenth. In the Cup, the breakaway triumphed. Abner González (Bathco) and Alberto Hernandez (Jufré) would consolidate their offensive and in Sanse would end up winning the first one. Carlos Rodríguez and Alex Martín remain first and second in the general standings for lack of a test. The only major change in qualifying was the promotion of Alex Navarro (Valverde Team) to fourth place, because David Domínguez (Tot Net-Terrasa), twenty-sixth, did not score.

“The race was very busy, with many attacks from all the teams and a certain lack of control,” said Rosal himself. “At the beginning it was rolled very fast, until the first step through Paracuellos, where the rhythm slowed down quite a bit. The next few miles would be all’stick after stick’. We were able to save the jersey thanks to the number of points we had, although we lost some valuable points for teams due to the leaks that we lost.

The previous day, in San Sebastian de los Reyes, the Madrid championships in the 80km category had been held. Miquel López (Ginestar) won the race alone with a 2:14 win over a group that included Javier Serrano. The Polartec-Kometa native from Madrid, fifth, a first-year junior, won the regional title.

“I’m getting a pretty good reading this weekend. The sensations were good and it seems that little by little we are taking off. We narrowly missed the victory on Saturday. And on Sunday, when it was very difficult to control the race, we were still very attentive to the important riders in the general classification. He tried to move the race away, but this time he didn’t start.  But I’m looking forward to the next one,” says Serrano.