Up to six cyclists, three riders who have competed in the junior team of the Alberto Contador Foundation and three others who have done so in the U23 structure, have given presence to the formations of the Kometa Cycling Team in the numerous concentration promoted by the Royal Spanish Cycling Federation in Alicante. A pioneering initiative, known as the Strategic Plan for High Performance and Technology, in which 68 riders took part in both mountain biking and road cycling. 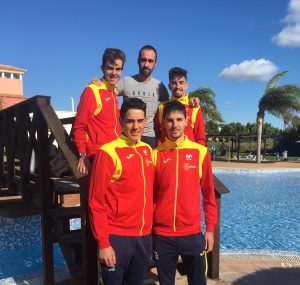 This Strategic Plan of High Performance and Technification of the Royal Spanish Cycling Federation emerged as an unprecedented initiative in the history of Spanish cycling. For four days the riders have been able to perform various tests and attend multiple training talks linked to the world of cycling.

“This concentration has been a very good opportunity for all the cyclists we are training. We would like to thank them for the help they have offered us in the areas of nutrition and psychology, as well as for the fact that they are going to follow us up with our coaches”, said Carlos Rodríguez in statements provided by the federation itself.

“It has been a unique experience, it has been the first time that they do it and the truth is that they have been very complete days. We have learned a lot. We have had talks, we have faced tests of all kinds on a psychological and physical level. If you work more with the base in this format I think that the lower categories can improve their results, which in the end is what you are looking for. It can be a great advance in the youth academy at the national level, I think it is a success,” explains Alejandro Ropero. “It was perfect, very well organised. We’ve done a lot of quality tests and if this goes on I think it’s going to be a big step forward to improve the selection criteria. For my part I am very satisfied with the work done. Let’s see how the next one goes, where we’ll do a field test and we’ll have to grit our teeth well”, says Joan Martí Bennassar.

Of the six cyclists who have competed this campaign in the teams of the Alberto Contador Foundation four will remain in their ranks in 2020. Alejandro Ropero takes the leap to professionalism and will compete in the Kometa-Xstra, while in the U23 team will follow another season Joan Martí Bennassar and Arturo Grávalos; the same structure is also promoted by Fernando Tercero.