This weekend were played the first two races of four at the Cabedo Trophy, after which the Rh+/Polartec of Alberto Contador Foundation has emerged as a leader both in teams and individual classification, with Tomeu Gelabert. Next weekend will be run the remaining two races, a team time trial and a road race that will also be the first one in the junior Spanish Cup. 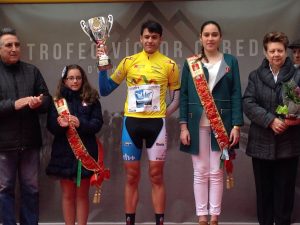 Both on Saturday and Sunday, the RH+/Polartec must face the great potential of the Russian team Lokosphinkx, who won the first race after a break of two of his men. Only thanks to Alberto Contador Foundation’s work as a group, the russians couldn’t decide from the first day the final classification.

However, the RH+/Polartec’s effort served to keep the excitement until the next and final weekend of Cabedo Trophy, besides to check the strength of Claudio Clavijo, who came to contest the sprint with Malnev, the winner and sole survivor of the breakaway, while behind came Tomeu Gelabert (fourth) and Daniel Rodriguez (sixth), that earned together the teams’ victory.

Today, the top ranked of RH+/Polartec was Tomeu Gelabert, 2 seconds behind the winner, Vicente Roig, but above all demonstrated his regularity to claim the provisional leader, to surpass in 16 seconds the winner of yesterday, which was among the leading group, where also was Claudio Clavijo, who is third in the standings with the same time. Contador Foundation was second by teams, but leads the provisional general with 38 seconds ahead of Lokosphinkx.

Yesterday there were also moments of bad luck with the fall of Joan Martí Bennassar, who had to retire and was replaced by the Murcian Jose Antonio Garcia. The director of juniors from Alberto Contador Foundation, Felix Garcia Casas, highlighted about his squad “the great result we have taken against a team like Lokosphinx, which is a whole international reference. We have been a step away from the individual victory, but as young this team is, it has been shown how to work as a group and can aspire to everything throughout the season”.