In Galapagar, around its velodrome, an interesting litter of new cycling talents has developed. The Anguela brothers, Eva and Mario, are two good examples. And also Samuel de Pablo. The Madrid native is one of the new faces of the Kometa-Xstra Cycling Team junior this season. The advent of the coronavirus pandemic, however, an arrival that for the moment has reduced the campaign to the month of February, has barely allowed him to face a race.

That debut, however, came in an entire Spanish Cup, at the promoted Guadiana Circuit. “The start of the season wasn’t particularly good, as in the only race I competed I was involved in a crash and had to drop out,” recalls De Pablo. “But these first months in the team, beyond that race circumstance, the truth is that they have been very good and I am very happy”. 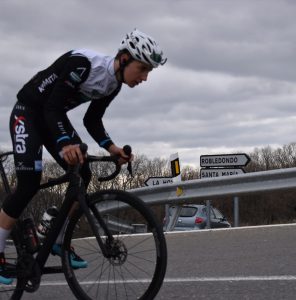 From that incident, a good blow and several abrasions on the left arm and leg and that profile of the face, without major consequences, in a few weeks to a total stop for public health issues. Training on the roller and fluid contact with the team, staff and colleagues, through video calls. “That routine is very good, there are always some jokes, which always reinforces the good atmosphere, and we are up to date with the news about schedules and conditions to go out on the streets or what is being talked about in the calendar”.

De Pablo faces the final stretch of May with much more motivation on a sporting level: “At this moment we are already seeing the light in this tunnel. You can already go out and shoot, although in Madrid you have to follow some schedules. Beyond the stripes, the important thing is that you can get out”.

Not only the bike has been affected. Also the studies. “There’s still the whole home stretch, but I’m doing well. Who would have thought that we would miss it”, he jokes. De Pablo is in his fourth year of ESO. And talking about his future educational interests, one can sense his economic concerns. “I’d like to study something related to the economy or the business world”.

Are you following closely the influence of the coronavirus on economic activity, its effects? “Yes, yes,” he adds. And how do you sense the future? “From my point of view there’s not going to be a crisis, there’s going to be a recession. It’s a shorter period than a crisis, but stronger because of the significant reduction in consumption and the increase in unemployment”.

In the meantime, the cycling world is beginning to take slow steps towards the possibility of recovering the competition. Are you optimistic about the coming months? “Not much, but we have to take it easy,” he says.