The Asturian Challenge Montaña Central concluded with a bittersweet feeling for the Polartec-Kometa junior team. In the final general standings, where Daniel Norena won, the formation placed three of its riders in the top ten, with Alex Martin in sixth place, the Briton Harrison Wood in seventh place and the Belgian Nathan Decuypere in ninth, without disdaining a second place in the final team classification.

The Polartec-Kometa, in the same way, had a presence in the race, with its share of protagonism also for Manuel Jesús Carrellán, Iván Oliver (both very active in the runaways of the second sector on Saturday) or Manuel Garrido (top-5 in the last stage), and finished in second place in the team time trial. Aseptically, wickers to be positive and satisfied. But the development of the competition also invites self-criticism, fundamental and necessary in a training category such as this one. A self-criticism present throughout the block. 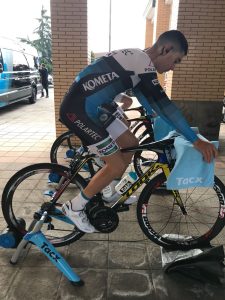 “I’m not very happy”, confesses Álex Martín. “The return has gone in courts where there were important people, courts we haven’t been to. We tried to react, but the race was already over. That’s why the balance for me is quite negative, although we got a good learning curve from this race. In order to make a good bet to win we lacked movement, we lacked to get into decisive cuts. All in all, I think we’ve had too little of a role for what is the usual team tone”.

The circumstances of the race are also important, they are a fundamental part of this sport. A fall on the first day, with a problem in his fork, prevented Harrison Wood from being in the lead group of six riders who starred in the first day. “Even though I had some bad luck in the first stage, I enjoyed this competition very much. I would like to thank the whole team for making this possible, and especially Felix, Alfredo and Guillermo for their guidance, advice and help during the race”, said the Briton. “I loved these days. The team spirit is incredible. It really has been a wonderful experience. It saddens me that it’s over”, said his colleague Decuypere.

Guillermo Gutiérrez, director: “The balance is not very positive, since we missed the escape on the first day and it was the one that decided the return. In the team time trial we were not as we should have been, after the great time trials in the past. And that psychologically took its toll on us. In the second sector of the second stage we did a great job, trying to be present in the race and enter all the leaks. We did it, first with Manuel Carrellán on the breakaway, then with Ivan Oliver and then on the breakaway that finally reached the finish line, where Harrison and Nathan were. On this last day we were unable to control the race despite numerous attempts to get into the breakaway”.