The cyclist from Granada Carlos Rodríguez, youth rider of the Alberto Contador Foundation that competes in this race enrolled in the Spanish national team, won this Saturday in the queen stage of the Volta a Valencia. The rider from Almuñecar crossed the finish line with three seconds of margin over a group of seven cyclists in which the leader, the British Simon Carr (Aix-en-Provence) was riding. The Andalusian is now the second classified of a provisional general where Carr remains at the front, with Rodriguez at 21 seconds. 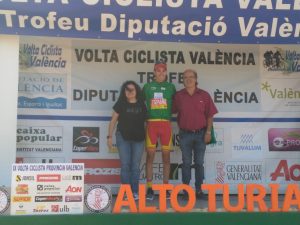 “I am very happy with this victory. I expected to be ahead in this stage, but not to get a win. In the last pass we took the last riders who were left of an escape and from the car they told us that we had a good chance to do well. As we were going up I was feeling better and I decided to try it. The last kilometre and a half of the stage was quite long, because there was a headwind, but fortunately I had achieved a sufficient distance so that they wouldn’t catch up with me from behind”, explains a Rodríguez who rode a 52×11 development on his bicycle.

The Valencian round was the first experience in the field sub23 for all the members of the junior team that participates in the framework of its preparation for the next World of Yorkshire, at the end of the month. In the queen stage of the race, five mountain pass on the route, the selection set a great performance, attentive to all the movements of the race, facing in first person some offensive and also including Alicante Juan Ayuso in the leading group. The champion of Spain of the juvenile category signed the second place of the stage.

At 17 seconds, twelfth, and integrating a quintet, crossed the finish line the Madrid Raul Garcia. The one from Tres Cantos occupies the fifth place in the provisional general standings, 1:01 from Simon Carr. “We knew we had to ride as far ahead as possible before the last climb,” he adds. The manchego of the Kometa Cycling Team Fernando Tercero finished 37th, 3:07 behind Rodríguez, while team-mate Javi Serrano finished 70th, just over twelve minutes away.

The Volta a Valencia finishes this Sunday with a 122.3 km stage that will start and finish in the town of Moncada. Carlos Rodríguez will face this last fraction wearing the green jersey that recognises him as the leader of the regularity classification, in which he is three points ahead of Sergio Román Martín (Caja Rural).